In lieu of cake baking, I've gathered a few round things together, beginning with the piped-icing ceiling rose in my daughter's bedroom - 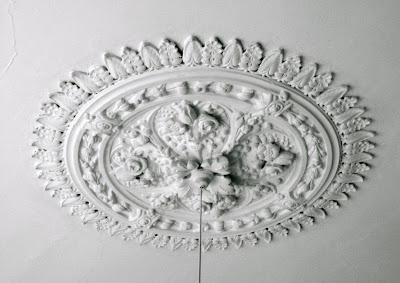 roundel |ˈroundl|noun1 a small disk, esp. a decorative medallion.• a picture or pattern contained in a circle.• Heraldry a plain filled circle as a charge (often with a special name according to color).2 a short poem consisting of three stanzas of three lines each, rhyming alternately, with the opening words repeated as a refrain after the first and third stanzas. The form, a variant of the rondeau, was developed by Swinburne.ORIGIN Middle English : from Old French rondel, from ro(u)nd- (see round ).


A roundel (not to be confused with the rondel) is a form of verse used in English language poetry devised by Algernon Charles Swinburne (1837-1909). It is a variation of the French rondeau form. It makes use of refrains, repeated according to a certain stylized pattern. A roundel consists of nine lines each having the same number of syllables, plus a refrain after the third line and after the last line. The refrain must be identical with the beginning of the first line: it may be a half-line, and rhymes with the second line. It has three stanzas and its rhyme scheme is as follows: A B A R ; B A B ; A B A R ; where R is the refrain.
Swinburne had published a book A Century of Roundels [1]. He dedicated these poems to his friend Christina Rossetti, who then started writing roundels herself. (How marvelous this  mutual inspiration amongst friends. . . )
A ROUNDEL    A roundel is wrought as a ring or a starbright sphere, (A)
With craft of delight and with cunning of sound unsought, (B)
That the heart of the hearer may smile if to pleasure his ear (A)
A roundel is wrought. (R)

Its jewel of music is carven of all or of aught - (B)
Love, laughter, or mourning - remembrance of rapture or fear - (A)
That fancy may fashion to hang in the ear of thought. (B)

As a bird's quick song runs round, and the hearts in us hear (A)
Pause answer to pause, and again the same strain caught, (B)
So moves the device whence, round as a pearl or tear, (A)
A roundel is wrought. (R)    Algernon Charles Swinburne (1837-1909) 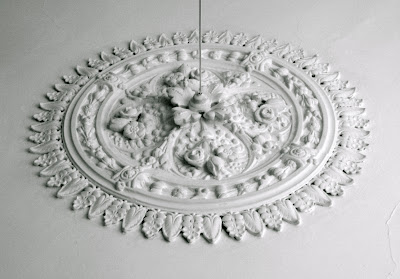 Mandala on a string/fancy umbrella stand (for a very flimsy umbrella)/elaborate city sidewalk drain cover. . .
In honour of our first birthday, Tuesday Poets have embarked on the creation of a communal poem, titled Tuesday. TP curator Mary McCallum posted the first line of this collaborative piece at a minute past midnight this morning. I was next up with a response to Mary's words; this poet-by-poet, line-by-line process will continue all week and culminate in a completed poem by Tuesday 12 April. Click on the quill to enter a whole new world and pop back to the TP hub during the week to witness the poem's unfolding. . .