Tonight I want to say something wonderful          for the sleepwalkers who have so much faith          in their legs, so much faith in the invisible          arrow carved into the carpet, the worn path
that leads to the stairs instead of the window,
the gaping doorway instead of the seamless mirror.

I love the way that sleepwalkers are willing
to step out of their bodies into the night,
to raise their arms and welcome the darkness,

palming the blank spaces, touching everything.
Always they return home safely, like blind men
who know it is morning by feeling shadows.

And always they wake up as themselves again.
That's why I want to say something astonishing
like: Our hearts are leaving our bodies.

Our hearts are thirsty black handkerchiefs
flying through the trees at night, soaking up
the darkest beams of moonlight, the music

of owls, the motion of wind-torn branches.
And now our hearts are thick black fists
flying back to the glove of our chests.

and walk through the skin of another life.
We have to drink the stupefying cup of darkness
and wake up to ourselves, nourished and surprised. 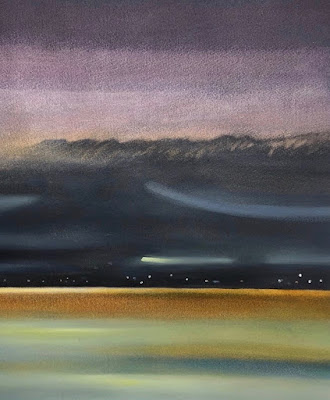 Posted by Claire Beynon at 11:42 AM No comments:

Some years ago, I was Artist-in-Resident for a week in the Caselberg Trust's cottage on the Otago Peninsula. In the kitchen cupboard were two old, pale and slightly brittle egg cups. A pair of hens, as you will see. Before leaving the cottage at the end of my stay, I photographed the egg cups on the kitchen windowsill along with my two last mandarins. Something about those photographs always made me smile -- and so this truly odd little vid. came into being.

The world is - quite literally, in places - on fire. We're daily tasked to somehow gather the bitter and the sweet together and to hold all manner of uncertainties and extremes alongside in the same oddly-shaped basket.
I'm posting this quirky wee vid. as a gift (and with just the faintest flutter of trepidation). My hope is it will bring joy, a moment's reprieve, some welcome lightness. It's not attempting to say or reveal anything about anything - nope, it's as simple and innocent as can be; two mandarins in two egg cups dancing in sunshine on a kitchen window sill. That's it. It's also not intended to be in any way 'flip' or irreverent - especially given current world realities. I know for myself (with my inborn 'PFI '- Propensity For Intensity) that there's something immeasurably uplifting about laughter.

It's often said, isn't it, that joy and sorrow stand back-to-back; each can spin/give way/allow us access to the other.

Email ThisBlogThis!Share to TwitterShare to FacebookShare to Pinterest
Labels: The rest is implicit, This day in August
Newer Posts Older Posts Home
Subscribe to: Posts (Atom)