Dictionary definitions of wind don't really cut it. Here are two:
1. (Merriam-Webster) 'A natural movement of air of any velocity; especially : the earth's air or the gas surrounding a planet in natural motion horizontally.'
2. (The Free Dictionary) 'Moving air, especially a natural and perceptible movement of air parallel to or along the ground.' 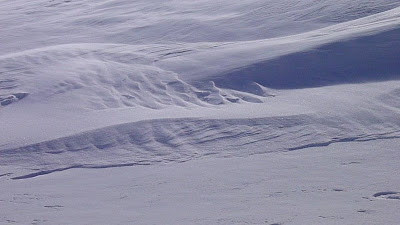 I've been particularly aware of air the past 72 hours or so. This is partly because Steve, Cecil and Shawn have just taken us all through our dive safety procedures in preparation for forthcoming operations at the (almost ready) Herbertson Glacier site. As dive tenders, it's imperative that we know what to do (i.e how to administer oxygen, who to contact where and when, etc... ) in case of an emergency.
'... Balancing on air is no easy task;
tripping sees me float
upwards or sideways, but never
down...' From Give me thunder CB 2003
The traditional belief within symbology is that of the four basic elements - earth, air, fire and water - air is the primary one. There are two major ideas related to the element of air. One is the idea of breath and breathing and the other is the rather different reality of wind. Breathing relates to air on a personal level, while wind relates to air on a more cosmic level. Both represent life, the power of the spirit, the transient, ephemeral and elusive.
Wind is in itself insubstantial and invisible - we see it and know it primarily by its effect. It can be tentative as a whisper, and yet - at the height of its activity - becomes the hurricane, with all the dynamism and energy attributed to processes of fecundation and regeneration. At this end of the continuum, there comes also the potential for expressions of violence and destruction. Interesting metaphors.
Air - the breath, breathing, inhaling and exhaling - is all-important when it comes to safe diving, too. And to safe tending. After dinner this evening, those of us who don't do this for a living spent a while re-familiarizing ourselves with oxygen cylinders, valves, regulators, lines and masks. Tomorrow morning we'll all accompany the divers out to one of the holes close to camp to carry out a mock rescue operation. I must admit that there's something a little discomforting - macabre even - about listening to your diver friends talk you through how you can be most effective and helpful to them in the (god forbid) event of Decompression Sickness or Arterial Gas Embolism. The reality, though, is that although such incidents are rare, there can be no room for complacency or naivete in environments such as this one. 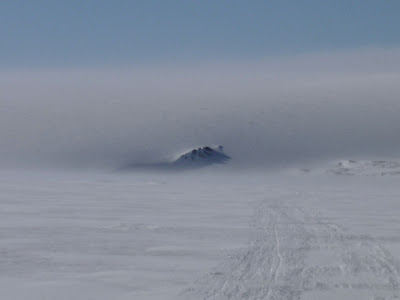 Two days ago, I was lucky enough to encounter a Condition Two storm on the far side of the Ferrar Sound - and then (happy, happy, joy, joy) to have to sleep out in it. It was exhilarating being caught - and temporarily held fast - in that fist of fierce weather.
'... Rare sounds abound in these places where wind is
dressed in white; it roars and twists
and winds its way into rock and lungs
and ice...' From New Harbour Psalm CB 2006
I was reminded of Thoreau writing something along these lines; there's wildness in all of us, and a simple side that loves to walk. So, yes, I succumbed to both during those hours - my wildness and my simple side - and strode out into the wind. 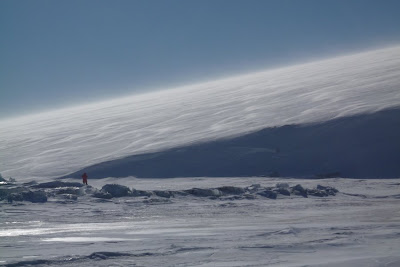 It does strike me as odd that when I'm on home turf, wind more often than not rumples and rattles me; it makes me want to batten down the hatches and stay indoors. And yet, here, the much greater force, noise and visual drama of a katabatic wind is an invitation for me to step outside. Standing in it, I find myself with an entirely different awareness of my body in space and possibly even in time. And if visibility's not what it's 'meant' to be and the usual familiar points of reference are no longer within grasp, it leads to an almost weightless feeling.  We're like feathers or flotsam in this place. This becomes even more apparent when we see and experience the wind 'at work,' displaying all the intention, zeal and passion of a sculptor mid-process. 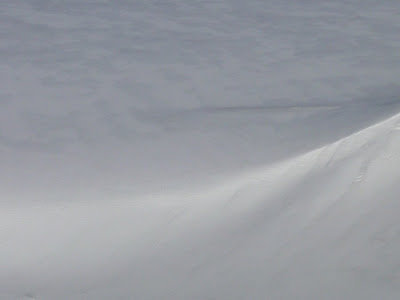