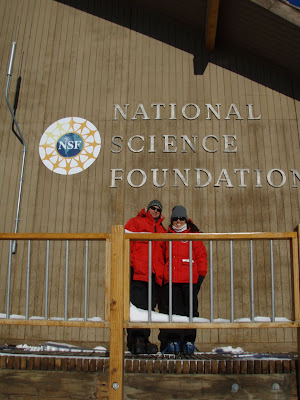 Cecil Shin and Steve Clabuesch are two of our divers. Steve was a member of our 2005 season - this year, it's wonderful to meet his (I have both their permission to address her thus!) better half/life partner/soulmate/dive buddy and wife - the fabulous and irrepressible Cecil (pronounced Sea-Sill). Steve (Dive Safety Officer, University of California, Santa Cruz) writes 'I return to New Harbor after 3 years, being reintroduced to a frozen sea surrounded by snow-capped mountains and glaciers. All visible life lives beneath the frozen sea in sizes and colors that are in stark contrast to what is on land; just us humans moving about, no birds, reptiles or insects visible anywhere. The constant daylight and crisp clear skies, spectacular vistas, good companions and interesting work - the season begins.' 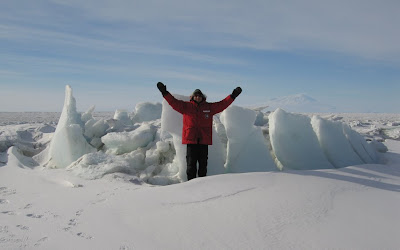 Cecil Shin (Head of recreational scuba, University of California, Santa Cruz) teaches entry-level to instructor-level classes at the university. She has been with the program for fourteen years, first as a student, then assistant, and now as the Head. 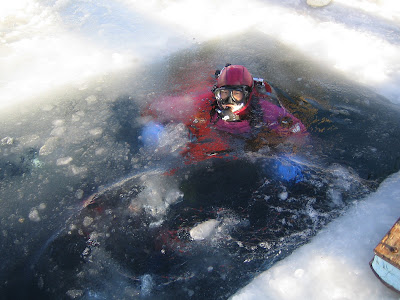 Of her experience so far, Cecil says ' This is my first time in the Antarctic and my first time ice diving. I am one of five research divers here. I was a little nervous about the cold and about ice diving at first but being a snow boarder, and having done cave-diving for three years, have prepared me (somewhat) for this amazing opportunity. I've done seven ice dives so far and have loved every one of them. Because I wear so many layers under my drysuit - three for my head, three for my body, three for my hands and four for my feet (goodness!) - I don't feel the cold underwater until about twenty-five minutes into the dive. And typically it's my hands that get cold. It is spectacular underwater - the clear water/great visibility, the ice ceiling above me with blue streaks that run through it, and the abundance of life. It's ironic that there's more visible life under the ice than above.
The other reward of coming here is the hands-on experience with such matters as snow survival skills, fueling up the various vehicles, compressors, heaters, and trials and tribulations of field science - trying out the sampling gear underwater, sorting out of different species in the sediment, and fine-tuning the scientific process (from questions to data to conclusions).
I have another month to go and am excited about what awaits me.' 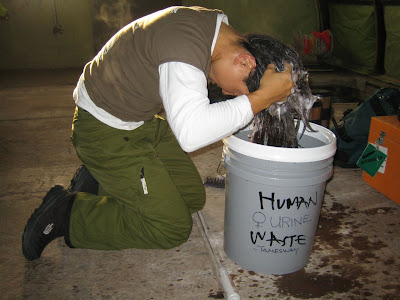 And here is a picture of Cecil washing her hair in one of our camp buckets!
Posted by Claire Beynon at 9:25 AM