The Gratitude Diaries
by Sue Crewe
"One day, my heirs and successors will have to deal with my diaries. These volumes already occupy several feet of my bookshelf and may have colonised several more by the time I'm done. They will notice that the A5 notebooks are in chronological order and that there is an entry for every day of the year. Already anachronistic - handwritten copy between hard covers - such a thing will be really quaint and bizarre in a couple of decades. Despite this, the heirs may be hopeful that they have come across a sensational cache of information and revelation.


Disappointingly for them, they will soon realize that there have never been such dull diaries. They contain no gossip or spicy anecdotes, they aren't written to entertain or even to provide a record of events: they are just an endless list of positives with not a bad word for anyone or anything. The heirs might as well wonder why anyone would bother with such banalities as they pile the diaries into a skip; but what they couldn't know is my not-so-secret formula for happiness.

Some years ago, after a period of turbulence in my life, a friend introduced me to the concept of keeping 'a journal of gratitude.' She gave me the book in which it was to be kept and suggested how to use it. 'Every day, write down five things to be grateful for and write them down,' she instructed. The journal she'd given me only provided five blank lines per day so there was no room for qualification or complaint. For the first few months I dutifully performed the ritual at night. Often I found it difficult to think of enough things and took refuge in being grateful for my comfortable bed or being warm or well fed. If the day had gone badly I could always be thankful that it had come to an end.

After a while it began to easier to find legitimate entries, and occasionally I had a problem with what should be left out. Rather than a chore, the diary-keeping was becoming a pleasure and the journal itself became precious and it was the first thing that went into my suitcase if I was going to be away from home.

Almost imperceptibly, free-floating anxiety and feeling of discontent with myself and the world were replaced by contentment and a clearer understanding of what I found acceptable and unacceptable about my own and other people's behaviour. Keeping a gratitude diary didn't prevent me from being a flawed human being or crashing the car or having rows or being lazy or suffering loss, but it did - and does - help me keep things in perspective.

For five years I replaced that first diary with physically identical ones, with the same rather cringe-making suggestions and aphorisms at the top of the page and the restricted space for entries. It was only in the sixth year that I felt secure enough in the gratitude-habit to buy a blank notebook and to embark on free-range gratitude diary keeping. Although the formula is the same - no more and no less than five things for which I am grateful - the extra space allows for a bit more elaboration; or possibly waffle.

I look back over past volumes from time to time and, given the limitations imposed by the formula, it is still extraordinary what a flood of recollection each page provokes. Some of them are extremely frustrating, for example one entry reads, 'I'm grateful that the chancellor agreed to the breakfast.' What was that about, I wonder, but the diary doesn't relate and I can't remember. The entries for the births of my three grandchildren, however (at which I was present), are equally succinct but they prompt the most vivid and detailed recall.

The diaries spell out very clearly what gives me the most satisfaction and pleasure. By far and away the most constant refrain is gratitude for my family and friends, for meals eaten together, for conversations, laughter and love. Running a close second are the occasions when I feel I've done a good job of work or completed some neglected or onerous task. Natural beauty and cerebral and sensory pleasures feature, but luxurious possessions and treats hardly get a look in.

It's hard to maintain many illusions about oneself in the face of so much detailed evidence. If I'd fondly imagined that I was a party girl with a passion for music and literature, these diaries would put me straight because they actually portray a family-oriented home-body with a puritanical work ethic who likes cooking and swimming. But the most transformative revelation is the power of the gratitude itself; it takes up so much room that everything corrosive and depressing is squeezed to the margins. It seems to push out resentment, fear, envy, self=pity and all the other ugly sentiments that bring you down, leaving room for serenity, contentment and optimism to take up residence. Tracking gratitude doesn't, however, make for a very thrilling diary. "
Sue Crewe
from Simple Pleasures - Little Things That Make Life Worthwhile.
pg. 194. (Random House, London UK)
Writing this short essay out one word at a time was a good exercise for me. I've been a bit stuck on the gratitude front lately, have needed reminding, a jolt or a nudge. I'm thinking it mightn't be a silly idea for me to begin my own Gratitude Diary.
What five things are you grateful for today? Here's my list -
(1) My children are all in one city (this one) for another few weeks
(2) I have seven new tubes of oil paint and
(3) Zoe Keating's latest cello album, 'Into the Trees' keeping me company in the studio
(4) Friends within arm's reach and in this community here
(5) The direction for my next body of work has made itself clear (more water, this time with the web)
And here are a few compasses (I've been playing in my studio) in case any of you would like one - 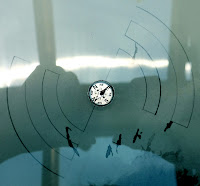 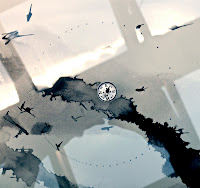 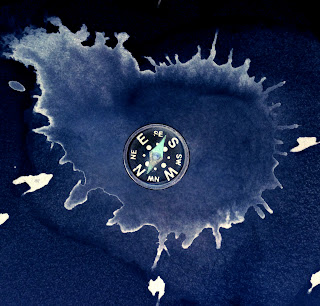