This is a picture of my brother Alan and I sitting on the top step of my maternal grandparent's swimming pool, c. 1963. When we were little, he and I went everywhere, did everything together; I adored him. 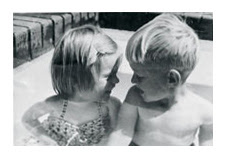 Alan died twenty-seven years ago today. I was at Art School in London when the phone call came. My first words to my father when I picked up the receiver in old Ms. Turner's bedroom were "Dad. It's Alan, isn't it?" For the two weeks preceding his death, I was dogged by a sense of unease, of premonitory knowing; I slept turbulently and dreamed nightly of fires and fireplaces. The day before I'd left Johannesburg for the UK, I'd spent a couple of hours with Alan in his furniture-renovation workshop; I'd taken my camera along with me but he didn't want to be photographed, so I took a series of images of the windows and skylights in his space instead. In the days before he died, I felt a burning need to place these photographs up on the wall in the little alcove next to my bed; each morning and before turning my light out at night, I would kiss the middle and index fingers on my right hand, then transfer the kiss to each of these images in turn. In the printmaking studio at Art School, I began work on a lithograph of one of Alan's skylights. I had a strange and strong sense of him being 'around' - so much so that one late afternoon, certain I'd seen him on the other side of The King's Road, I waved my arms about and called out his name before weaving myself through the peak hour traffic to reach him. Of course, it was not Alan I had seen but a young man surprised by a stranger's impulse to lay her hand on his shoulder.
*
BROTHER
I
You warmed my blood
for years I kept an eye
on you. Now I tell myself
Death at least is
an honest continent
a simple compost
of history and bones.
II
Chisel an altar
out of mourning.
When stone thaws
and herons dream
unbind your feet
and sign yourself.
CB 2006
Ali-B  - we remember.