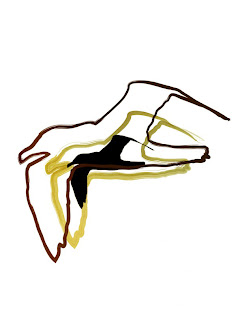 LEARNING FROM THE BIRDS

This parent does not fuss:
six days at sea;
six minutes now suffice

to deliver her burden
to the child that waddles over,
claps and daddles beak at beak —

up comes the mess of squid
scooped from the black
a thousand miles off.

New-fledged, the young must jettison
the undigested stuff of infancy:
bones and fins, the beaks of octopi.

nor how to wrest eight writhing limbs
from the open sea at night.

I was happy to be in the audience a couple of Wednesdays ago when Penelope read her poem Albatross. Vegan cafe Circadian Rhythm hosts a monthly poetry gathering here in Dunedin and we were there to listen and read. I barely gave Penelope time to sit down after her turn at the mic before asking if I could please post her poem here - and soon? Thank you, Pen.

In Dunedin, when the first adult Royal Albatross returns to land after spending many months at sea - and, too, when the first albatross chick hatches - the city's cathedrals bells ring out in celebration.

This week's editor on the Tuesday Poem hub is Helen McKinlay
with Lines for a New Year
by iconic NZ poet Sam Hunt.

Sam generously offered up a second - unpublished - poem for readers, titled Tell Me What

"Tell me what I don't know -
not what I know now

The end of the year is fast approaching. . . There will be one more Tuesday Poem posted on the hub next week, after which we will all take a break, re-congregating towards the end of January 2013. (2013! Pinch me?) xo

Posted by Claire Beynon at 4:29 PM