Penelope Todd will be well-known to many of you. She's a witty and generous blogger and, too, the brains, muscles and heart behind Australasia's first e-publishing company, Rosa Mira Books.  In a nutshell, she's a pioneer - and a visionary. She is also an award-winning author of a substantial library of books - Island (a novel), Digging for Spain: a writer's Journey (memoir), The Watermark Trilogy - Watermark, Dark and Zillah - Three's A Crowd, Peri, Boy Next Door and Box (Young Adult Fiction), all of which you can check out (and order) here.

Penelope's most recent work is a unique and ambitious collaborative novel titled Amigas, co-written in English and Spanish with Argentinian author and friend Elena Bossi. On her website, Penelope introduces Amigas as follows -


"When Elena Bossi and I met in Iowa 2007, our common languages were mime and laughter. My Spanish was paltry; Elena’s English was picturesque. Nevertheless, on parting, to sustain our friendship, we agreed to write a novel together in alternate chapters (and letters), each in our own country and language. In 2009, we met in Argentina to polish the translations of our story.
Amigas 'presents both English and Spanish versions in one digital edition.

2009: in Argentina, a woman prepares to travel to Italy for a funeral. In New Zealand, two friends discuss art, loss, and how to accept life as it plays out.
1969: a girl from New Zealand and another from Argentina are stranded in the airport in Rome. A friendship is forged and they exchange letters for a decade, until events take a sinister turn during Argentina’s ‘dirty war’.
2009: again in the airport in Rome, cancelled flights throw together two women whose lives have intersected in unexpected ways.
The hidden threads of these friendships are drawn deftly together.
Amigas is a story of female friendships, how they are forged, how they endure across time and geography, how they stimulate and sustain."

I've wanted to recommend Amigas to you since it was launched online a couple of months ago. The cover (striking, yes?) carries an albatross* created by Elena's son, Pablo. 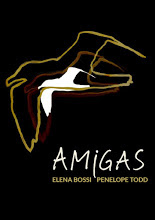 "The prose is cogent, clear and often shot through with silken lyricism. There is resonant, evocative work here that leaves a long emotional contrail in the reader." Emma Neale


". . . Just to congratulate you and Elena on this delightful story. I loved the characters, strong, very different voices, the joys and hiccups of their developing relationship. I loved the contrasts between the increasingly harsh realities of Claudia's world, and the almost cottonwool comfort of Jude's, and yet the ordinariness of both, family, the growing of girls to womanhood. I cared about these two. And for that reason I appreciated the integrity of the ending. I wanted a happy ending. I wanted Claudia to be well and happy. Then I just wanted information about her … in its fictional way it honoured the truth of what the people of Argentina endured  during those years …  Humanity shines through this story. The structure, the skipping from country to country, culture to culture, language to language, brought home in the most powerful and subtle way, that a basic humanity is what we all share, linked by that and by shared pain and love." Carolyn McCurdie (poet, novelist and short story writer)

"Finished Amigas - loved it. Authentic evocation of the late sixties and pleasing tension to keep me scrolling.  Expertly written, believable characters I really cared about. A smooth collaboration and a compelling story-line." Kay Cooke 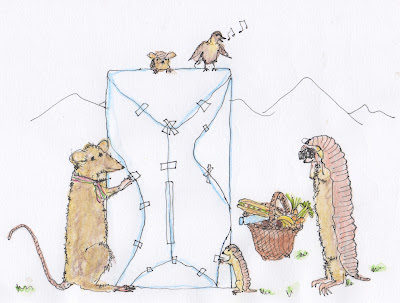 Penelope blogs here (The Intertidal Zone) and here (Rosa Mira Books). You will definitely want to meet RMB's PR 'person'. Ratty announced himself (and his role) to Penelope one afternoon as she was sitting with her sketchbook open. She says he arrived pretty much 'fully formed'. Lily the Pink turned up next. She's the love of his life, a fairy pink armadillo from Argentina. Their union resulted in the arrival of twin ratadillos, Isgar and Dasychord (so named by RMB readers). 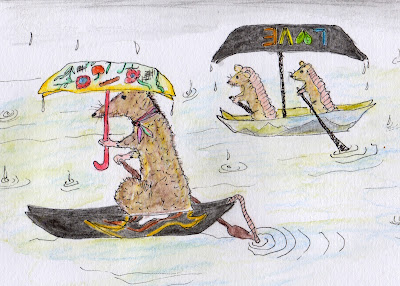 Do yourselves - and your loved ones - a favor and visit the RMB website before Christmas? Support its dedicated crew by buying an ebook or two. You will not be disappointed. Reviews for Rosa Mira Book's first four publications have been stellar - from readers and critics alike. I take my hat off to Penelope. It takes faith and tenacity to turn a vision into reality, especially given the precariousness and unpredictability of today's world, economic and otherwise. She's an astute editor with an ear for much more than grammatical pedantry and surface story.

Posted by Claire Beynon at 4:00 PM