Before farewell-ing my niece and nephew in South Africa earlier this year we made an outing to the nursery to hunt out a family of Venus Fly Traps. Philip had been keeping his bright observer's eye on the plant in his school library and expressed a wish to have a Trap of his own at home. Little sisters - don't I know - are easily lured by an older brother's interests. . . Victoria decided she would also like one and it didn't take the two of them long to persuade their Dad - my younger brother, John - to choose one, too. We took three home with us that day - 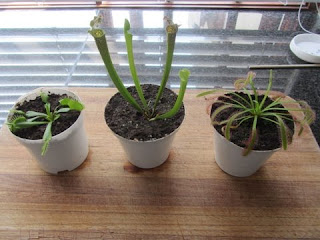 After much earnest discussion, Philip named his plant Sunev - Venus, spelled backwards (my family has a penchant for speaking in spoonerisms. Sunev Nonyeb has an exotic ring to it, yes?). We talked about the implications of his chosen name; the fact it contains the word 'sun' - essential to and for all life on our planet. He understands that via the process of photosynthesis, chlorophyll (phyll/phil - his name's in there, too!) harnesses the sun's energy in order to fulfill certain metabolic functions. We also noted that the prefix '-ev' begins the words 'ever', 'eventually' and 'evolution'. Sunev was just right.


In an email he sent me not long after I'd returned home to New Zealand, Philip brought me up to date with how he and his plant were doing. . .


"Sunev drinks about 99 ml every 24 hours and seams to always have 4 or 5 shoots all the time. It takes  about  56 hours for the shoots to grow about 5 cm so I think he* likes his new spot. We have moved him to the main kitchen window because there wasn’t enough light where he was before. . . " 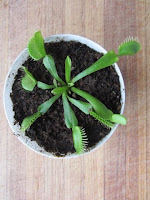 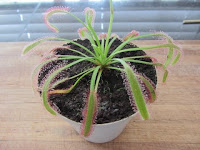 
I miss my sibs' children. There's an abiding sadness in me that circumstances are such that we see each other only rarely and that our children have grown up on opposite sides of the world from their cousins. There's more that could be written on this but this is neither the time nor the place. Suffice to say these children - Philip and Tor-tor in South Africa and my sister's three in the UK - are firmly ensconced in their distant aunt's heart.


Phil and Tor-tor, here's a story I found for you on the internet -
* Phil, after reading this, you may come to see your Trap as a 'she'?! x


"There was once a poor peasant and his wife who had a very beautiful daughter named Sunev. So beautiful was she that her hair rivaled the sun in its golden brightness. Her eyes were like the blue sky and her lips were so red that the roses beheld her with envy. Her skin was so white and fair that the winter snow was not whiter. Her teeth were like the pearls. And when an old witch named Zitna, who lived in the forest near by, saw Sunev one day she became enraged because she was more beautiful than her own daughter.

Witch Zitna had thought till then that her own daughter was the most beautiful creature in the world, for the witch child was as dark as Sunev was fair, and Witch Zitna wished the Prince of Esor, who was looking for a wife, to wed her.

She knew that the Prince had sent out his servants far and near to look for the most beautiful lady in the country for his wife, and if Sunev were brought before the Prince of Esor her daughter would never be chosen.

There was only one thing to do, and that was to entice the lovely Sunev into the forest and there change her into the shape of an animal and leave her to her fate.

The wicked Witch Zitna watched her chance, and one day, when Sunev was sent into the forest to gather wood, Witch Zitna slipped out from behind a tree and touched her with her magic stick, changing her into a tiger.

Poor little Sunev was so frightened when she beheld her paws she fell on the ground and began to moan and cry and all the birds and animals of the forest came running to see what had happened.

The witch, in her haste, forgot to deprive Sunev of her power to talk, so when the birds and animals wanted to know what was the matter she told them she did not know, but something dreadful had happened and she was no longer a girl, but a tiger, and was afraid to go home. The birds and animals can understand any language, and, being now part animal herself, Sunev had no trouble in understanding them.

“Do not cry,” they told her. “It must be the work of Witch Zitna, but we will protect you, and when the hunters come we will warn you so you may hide until they go. Eat the berries and nuts and we will find you a nice place to sleep, so dry your eyes and some way may be found to restore you to your own shape.”

You can read the rest of the story here. . .

. . .  and when you're done, come back and watch these ridonkulous (your word, Phil) Fly Trap vids.


One more thing. . . Did you know that our sister planet Venus will be putting on a spectacular display for us next month?

A transit of Venus occurs when Venus passes directly between the sun and earth. On 5 or 6 June (depending where in the world we all are), we'll be able to see the distant planet as a small dot gliding slowly across the sun. Historically, this rare alignment was how we measured the size of our solar system.  It's a rare and special event that happens in pairs, eight years apart (and separated by over a century!) The last transit of Venus was in 2004. After the June 2012 alignment, the next event occurs in 2117. Exciting! We need to create special viewing shields in order to watch it so that we don't damage our eyes. You can read all about the 2012 Venus Transit here.

Posted by Claire Beynon at 9:22 AM