In darkness Persephone walks
the earth flinches
with every absentminded footfall.
She does not speak, she listens,
and listening, hears her rough soles
smooth and cut, chip and polish
her surrounding plateau of shadows.

Every forward step she takes,
she makes the dark earth tremor.

Persephone walks - and on and on
and on she walks. And when
- pre-dawn - she stops
she finds she's standing still
on solid ground; so strange
and dark a land she knows
she's not been here before
nor felt the restless press
of moths mistaking her presence
for a candle; how slight
their quiet antennae tracing
the contours of her face,
her heart - each passing wing,
an eye; each eye, a question
hovering. 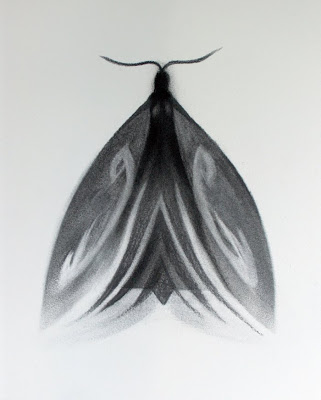 Hello friends. I'm still on the road/in the air, making my way from North to South and East to West with a glide, a lunge, a swoop. My suitcase has taken itself off on three independent adventures since I left home in late March. It's showing signs of wear, must surely have a story or two to tell? Right now, 'tis 'here', 'tis all. I've enjoyed being without it more than I've enjoyed being with it; cumbersome thing, baggage. Next time I go anywhere, it'll definitely be with a whole lot less 'stuff'.


As often seems to happen, we're tuned in to the same frequencies out here. Computer time - when I've had it - has been pretty much all work-related this past month (I'm way behind with correspondence and haven't been able to read, comment or answer comments in yonks - apologies, apologies). Reading around the blogosphere this evening, I'm not surprised to discover moths are a theme this week. I arrived in Albuquerque, New Mexico last night and - as if in response to some faintly-whispered cue - we're being visited by moths. And I mean flocks of moths - flittering, fleeting, fluttering, floundering dusty-winged moths. Along with Marylinn, I consider them messengers. If you haven't read her post titled 'Attributes of the Moth', pop over to her blog where she has written about them as only she can.

". . . When I looked into what moth brings as a totem I found: the ability to perceive with clarity, strong healing abilities, protection for traveling between darkness and the light, finding light in darkness, metamorphosis and, in common with the phoenix, rising from the ashes, in moth's case of the flames to which it is drawn. . . "

For more Tuesday Poems, please click on the quill.
This week's editor on the hub is Alicia Ponder with Helen Lowe's poem Fey. . . and, guess what? Yes, you'll find moths there, too.

Posted by Claire Beynon at 8:39 PM