It has taken two days to get here. When it comes to travel, New Zealand really is on the other side of the globe! A long journey at the best of times, this one ended up being quite a bit longer. Ten minutes prior to landing in Frankfurt we learned that Lufthansa's ground staff were on strike and as a result all connecting flights with that airline had been cancelled indefinitely. I was fortunate to be offered seats on two Swiss Air flights later than morning - the delay meant 'losing' a day in Barcelona but had I not been re-routed, I might have missed out on Barcelona altogether.


Always amazed that airports work as well as they do, I was nevertheless not surprised to find that my re-routed suitcase hadn't been able to keep up once my itinerary had been changed. It went missing somewhere between Frankfurt, Zurich and here but will likely turn up before I leave for Ibiza first thing on Friday morning. Meantime, I'm enjoying traveling light, and let me tell you it's a whole lot easier making one's way across a city with a handbag (whose modest stomach holds my travel docs, a hairbrush, pencil, journal, glasses and lippy) and one small, lighter-than-usual piece of hand luggage (containing laptop, camera and a handful of books). I took a bus from the airport to Plaza Catalunya where - a little whelmed from lack of sleep and the excitement of being here - I spent about twelve dilly minutes scampering up and down escalators in a huge family-style department store searching for a replacement toothbrush and t'paste, knickers, plain white singlet and shampoo. . . What more would I need? (And what on earth had I packed into my missing 20 kg suitcase? We make such pack-horses of ourselves, don't we, wandering about with our weight on our backs.) 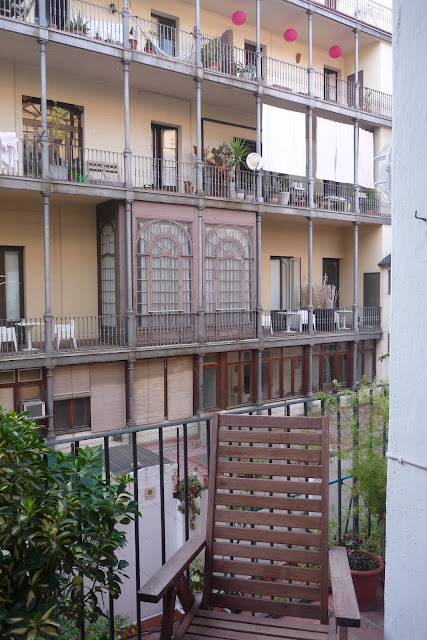 These pics show the view from the bedroom in the apartment I'm staying in. . . How curious to cross miles of ocean and land to visit an ostensibly foreign place only to discover on arrival that everything has a ring of the familiar about it. Everything. The apartment. The language. The city smells. The stone lions and metal minotaurs. The full-throated, unselfconscious sidewalk conversations. The different timbre of this city's laughter - which makes me wonder. . . Is the colour and texture of our laughter and our tears affected by the language we speak? Does sound inhabits our body in language-tinted ways? (I'm curious to hear what you think?).


Unashamedly wanton when it comes to weathered surfaces, I love this city's muddle; its brickwork and cracking plaster, expressive wrought-iron balustrades and soft, loaf-shaped roofs (tomorrow, Gaudi will render me speechless, I know it). . . 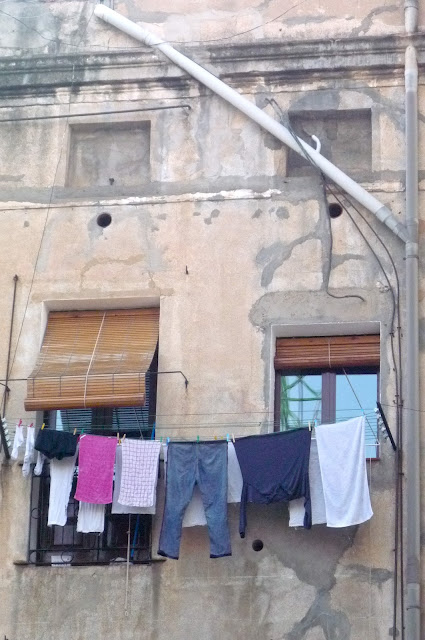 And then there's beautiful, gracious Marta - a writer, colour therapist, architect and sacred geometrician - who has welcomed me into her home; complete strangers only till the moment of our meeting. Can lives and lifetimes converge in a split second? Neither of us speaks the other's language and yet last night's conversation could not have held more, nor been any richer. Something's afoot (when is something not, I wonder?). It's the middle of the night and the neighbourhood's asleep. How good it is to see Northern hemisphere stars through my bedroom shutters; they seem plucking distance away. Light sentries of the night, I like to think they are keeping watch, minding their own business, yes - and ours, too - high above the clay-tiles, the Jacob's ladder scaffold of chimneys, television aerials and tilting satellite dishes.

Posted by Claire Beynon at 5:49 PM