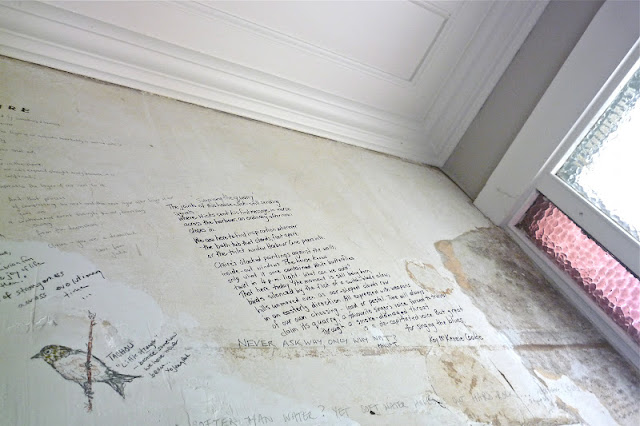 The joints of this house click - still sending signals -

where Hicks* sent the first message in morse
across the harbour, an ordinary afternoon closes in.

We are here to find inspiration wherever
- the bath-tub that stands, feet apart,
or the toilet window Harbour Cone peers into.

Claire’s stacked paintings against the walls;
inside-out windows. The house knows
only what it once contained. White butterflies

twirl in four p.m. light. What can we add?
That here today the moment is still being born;
birds silenced by the flick of a switch-blade claw;

hills unmoved even as oar-shaped clouds row
in an easterly direction. All expressed with weapons
of our own choosing - lead or pastel. Time will always

claim its quarry; a favourite singer’s voice
forced to travel through a smoke-damaged throat
is a de-capitated voice. But great for singing the blues.

A couple of times a year, I get together with three women friends - Kay, Martha and Penelope (dedicated director of Rosa Mira Books and creator of The Most Unique PR-family In The World - Ratty, Lily The Pink, Isgar and Daisychord) - to workshop poems. We rotate houses (so to speak). Kay wrote Surprising the Quarry one afternoon we'd gathered at 22. She read it aloud to us in the moment; a poem with still-damp wings, it arrived pretty much fully-formed. I love the details she picked up on; the new slant on old things I've grown accustomed to. . . I especially love the opening line 'the joints of this old house click - still sending signals' (they do) and 'What can we add? That today the moment is still being born. . .' Oh, and too, the 'hills unmoved even as oar-shaped clouds row in an easterly direction.'


Kay is a much-loved and -respected Dunedin poet and warm-hearted friend. She identifies deeply with our South Island landscapes (I believe our rivers run in her veins). Kay has published two collections - Made For Weather and Feeding The Dogs. Her third book, Born To A Red-Headed Woman (also the title of her blog) is due out soon.

The joints of my house - no. 22 (built in 1880) - really do click. Like every good man and woman, she has weathered much over the years; there are several chapters to her story. It turns out Kay's poem was prescient. Since returning from South Africa a few weeks ago, I have noticed cracks and signs of stress that were not there before I went away in early December. Two builder friends suggest she's showing signs of earthquake fatigue. . . not uncommon, apparently, even down here, 380 kms South of our sister city, Christchurch. I've been advised to lodge a claim with the Earthquake Commission (which I have done); the next step is to organize an independent assessment from a structural engineer. I'm not sure yet what the implications are. One step at a time. I am humbled all over again by all that our Christchurch friends have endured since September 2010.


Every time something 'happens' to my house - structurally, esp., - I contemplate its symbolic, metaphoric meaning. Was it Jung who first referred to our psyche as 'a house of many rooms' (I'm paraphrasing)? Jung aside, I have long been interested in the correspondence/correlation between the things that manifest - often simultaneously - in our outer and inner worlds. . . The stories our house/our bodies tell us seem to me parts of the same thing; each has the potential to reveal hidden flaws and fractures, necessary truths? Suffice to say, I am paying attention.


Staying with my house a moment. She (22 is def. female) was significantly damaged during a bizarre thunderstorm in Dunedin in February 2005. At the time - my personal foundations shaken - I was in the process of separating out from my husband of 19 years. Waterfalls gushed through the roof and into every room. Walls had to be stripped back, relined, re-plastered, repainted. An entire outbuilding collapsed, taking with it my laundry and loo (22 had an outside bathroom in earlier days). One wing had to be completely rebuilt. The crisis gave birth to my beautiful studio - it was as though the house was taking things into her own hands and insisting on this - inviting me to take my place fully in a whole new chapter.


In honour of this transformative process, I left a wall in my passage 'exposed'. I like the idea of the house wearing this aspect of her history 'on her sleeve' and refer to this as her 'dreaming wall'. In the ensuing years, the wall has become a notebook/sketch pad/ideas board/telephone directory and visitor's 'book'. On my fiftieth birthday, Kay transcribed Surprising the Quarry onto the wall (see pic above). She made me chuckle last night, in her email saying 'yes' to my posting her poem here today. Her response to my telling her about 22's latest malady was this - 'Sorry the old girl is needing hip replacements ... hope it all goes well and is a stress-free process for you guys.'


This is turning into a much longer post than I'd intended. I must be distractible (am supposed to be working on a talk for Thursday - International Women's Day - isn't that the way?!).


* To add an interesting bit of background to Kay's poems and the house, 'clicks' rhymes with Hicks. . .(Clever Kay ; )). Stanton Hicks lived with his family at 22 in the early years of last century. The photograph below shows him and his friends sitting on the front steps on the harbour side of the house.


An excerpt from our then-local newspaper, The Witness - "The first concrete evidence of transmitting and receiving Morse messages occurred on September 10, 1908, when two Otago Boys High School pupils, Stanton Hicks and Rawson Stark, sent messages across Otago Harbour between their homes in Ravensbourne and Andersons Bay. . . The Witness reported: "About two years ago the three boys seriously set about the equipment of a wireless station each, but although the conception was somewhat ambitious for boys of 14 and 15 years of age, their equipments were extremely modest comprising one or two small induction coils and battery cells of feeble power.

"Pocket money being scarce, their ingenuity found vent in unexpected directions. Discarded material and scrap heaps of various workshops in the city were laid under generous tribute. They were indeed like starlings at nesting time, and their school teachers can tell of weirdly distorted pockets and bulging school bags, as odds and ends were being collected and smuggled to safety, until the boys were free from lessons, when they would rush to their respective homes and toil away industriously."  (Continue reading this story here ) 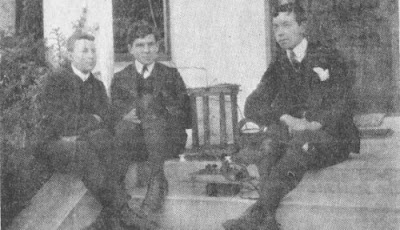 Cyril Brandon (17), pictured left, Rawson Stark (17), centre, and Stanton Hicks (16) are shown (on the steps of the Hick's Ravensbourne home) in an Otago Witness photograph with one of their wireless stations.

This week's editor on the TP hub is UK-based Kiwi writer Belinda Hollyer with the poem Five Quartets by Australian John Tranter.