I wake happily before 5 most mornings these days - love being up in the early dark, early light. It's blissfully quiet. There are no cars. No dogs barking. The harbour gulls and neighbourhood birds are still asleep, sweet heads tucked neatly underwing.
There's an interesting energy in the air at the moment and it's not just because we're finally experiencing summer. It's deliciously warm for a change, but this is about more than that. The energy I'm talking about is fiery - the kind that comes with a buzz and crackle. Good fire. Welcome fire. Fire that energizes, rather than scolds, devastates or scorches. It's transformational - in the way light is.
Do you feel it, too? 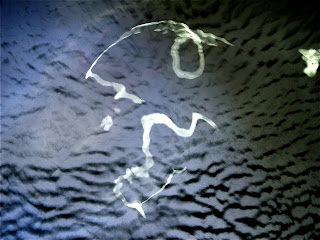 Light dancing in a tin bucket  - Antarctica 2005
Speaking of light, this morning I visited The Tearful Dishwasher and was reminded of fireflies. (Thank you, Tearful.). The image on his latest post took me back to a time and place I return to often in heart and mind and is one I am always grateful to be reminded of.
Four years ago, my good friend Katherine and I spent three days and nights with a river in the lap of the Du Toit's Kloof mountains.
I told Tearful how we'd both needed the river "... to be afloat in it, carried by it, near it' and how on the third night '... the black mountains flanking the river like curious custodians came alive with flocks (not swarms) of fireflies. They were big as birds. We had never seen anything like it before - and haven't since. For what might have been an hour or so, but was a timeless time in the way such moments are, we watched them delighting in the moonless night... I have never forgotten its magic."
How susceptible are we to seduction by light and fire?
I know I am. At the moment, for instance, I'm working on an exciting and somewhat unexpected project - a film. It's totally firing me up - I especially love the fact that it's a collaboration, that we have an absurdly tight timeline and that its completion depends entirely on people's trust, creative surrender and generosity of spirit. This is the very best way to work. Fire under foot, in the belly, ablaze in the group.
Robert Wilkinson over on Aquarius Papers posted this marvelous piece by Goethe a day or two ago -
“Until one is committed, there is hesitancy, the chance to draw back, always ineffectiveness. Concerning all acts of initiative (and creation), there is one elementary truth the ignorance of which kills countless ideas and splendid plans: that the moment one definitely commits oneself, then providence moves too. A whole stream of events issues from the decision, raising in one's favor all manner of unforeseen incidents, meetings and material assistance, which no man could have dreamt would have come his way.”
Goethe's encouraging us to think in terms of capacity, rather than limitation. Not necessarily a simple straight line, this, but definitely worth a try!
><
PS. I have enough parsley in my garden right now - Italian and the old-fashioned, crinkly-perm kind - to send in all directions; as fast as I pick it, it multiplies. Every day, I bring a small armful into the kitchen to snip and pop into the freezer. It'll come in handy some months from now, when soup weather returns... would anyone out there like some?
Posted by Claire Beynon at 7:11 AM