Three weeks ago, at the ArtScience symposium that was held down here, I had the pleasure of meeting Paul Trotman, Dunedin-based medical doctor and documentary filmmaker. I was one of many in the darkened auditorium who found themselves falling from the buzz of high-energy discussion into hushed silence as Paul shared with us a selection of carefully-chosen excerpts from his brave new film, Donated to Science. 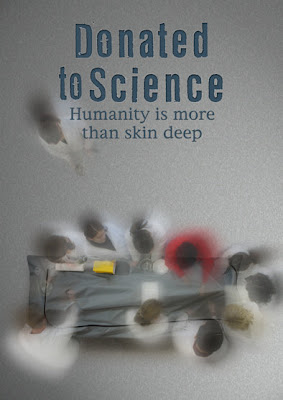 This is by no means easy viewing. How could it be with reality and truth as its central characters? We are not so good at seeing things as they are. Not so good at traveling right into the heart of things - especially not when death and the human body are involved. Death is difficult even when we know it's part of life. Even when we believe it's a comma in a much longer sentence, rather than an abrupt full stop.
On the surface of it, Donated to Science is a documentary about human dissection.  The idea alone is fraught, discomforting. In his introductory synopsis, Paul asks "What happens when someone donates their body to science? How does dissecting a real human body affect the medical students who do it? Why do people donate their bodies? What do their relatives think?"
This is tough stuff; sit-on-the-edge-of-your-seat stuff. How could it not be? It is, however, many things besides. Donated to Science is a profoundly tender and life-affirming film; an expression of care, mystery and beauty, too. Life, Death and their complex, kindred processes are laid bare here. We are invited in as privileged witnesses to necessary and respectful processes of analysis for understanding's sake. As a documentary, the film  lifts the cloak on medical method whilst emphasizing what essentially comes down to what I can only call 'right relationships'; those between loved ones, between medical student and donated body, teacher and scholar, death and life. It is a film about grief, compassion, fear and longing. And - in strange, unexpected ways - it is a celebration of Man's extraordinary capacity for generosity and courage.
Donated to Science premiers in New Zealand at 9.30PM on TV3 this Wednesday evening, 18 November.

To watch an introductory preview, visit Realscreen
Paul's PRN Films website also has a number of links to related articles and sites.
><
Quotes from Paul's website:
"That film has stayed with me since viewing. I am sure it was obvious to you that we were, at best, nervous about the film but in reality, pretty much against the whole thing. It was one of my life's great surprises and joys to come out of the viewing room completely turned around in my opinion. I am immensely proud that Dad was involved in this project and you should be very proud of what you have achieved." Tim, son of one of the donors in the film.
"... you don't really expect beauty to be your lingering impression of a film about cadaver dissection... It's interesting that one can have a deep and intimate relationship with a group of people after death. The students were marvelously articulate and open - love to have any one of them as my doctor." Mary Roach, author of Stiff
Posted by Claire Beynon at 8:21 AM