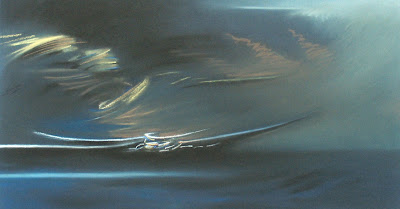 When the sun had slipped behind the hills
I said, let’s go back. Forget this business
of lures and lines and casting so far
the eye could hardly follow the thread
out to snag a rainbow’s lip. Afraid
we’d lose our way and soon our boat
would spin and sink. There we’d sit
eye to eye with a million fish.
When I was eight I caught my limit.
But not before my father turned the boat
to shore and let out one last line for luck.
I held that rod for all the hope left
reeling in the depths. I pulled
trout from tangled, churning light
slipping underhand.
I don’t know who was more the spectacle—
the lake, me, or my father guiding the pole
between my unbelieving hands. Somehow
he trusted in the end of all filtering light.
When he died the next winter,
I remembered six fish
laid out on a plank.
Eye to eye with the dead, in the wake
of the boat, I learned the limits,
the last ripple of life in a dying fish. 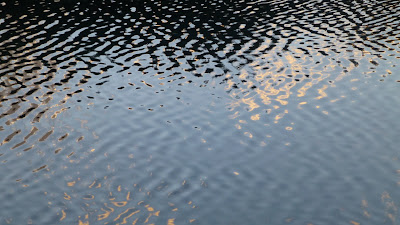 I met T. Clear online some three or more years ago. 'T' stands for Therese; she prefers to be called 'T'. Last year we met - hooray - in person, in Seattle. I'd arrived at her Brandon Street home a little ahead of her and was waiting on the curb when she returned from her day's work at Melinda's glass studio. We took one glance at each other, laughed wholeheartedly and fell immediately into conversation - not a smidge of 'first-time-meeting' awkwardness. After dropping our various bits of paraphernalia inside the house we headed for the woods T so often writes about on her blog - http://premium-t.blogspot.co.nz/  (a place she seems to visit in all weathers and at any time of day or night!). I imagine by now she'd be capable of walking those forest tracks blind-folded, guided by the sound of her footfall on moss, lichen and tree root, the owls' call or the faint scuffle indicating the presence of eagles as they rummage in their ramshackle eyrie atop their chosen alder. A living-sculpture-of-a-tree in an unexpected clearing, this gnarly-barked giant is not only home to a pair of these majestic birds but also custodian to a diligently-tended, knot-shaped altar of unusual offerings.


I'm sure I have several of you to thank for my online introduction to T (thank you!). Much-loved poets Theodore Roethke and Seamus Heaney surely had a part to play in our meeting, too. (She and I might have posted Roethke's 'Waking' on the same day/in the same week some years back? Who knows how these connections happen?)

I dithered at length over which of T's fine poems to post here today. Initially I'd asked her if for permission to post Pond; it was all pretty much typed up and ready to go when the news came in that Seamus Heaney had passed away (oh, sorrowful day). Given the respect and tender regard both T and I have for Seamus Heaney and his work, I decided to hold Pond for another time and instead post Limit of Spectacle Lake. My sense is this would be her preferred poem for this week, too. (She is away at the moment so I'm acting on faith here).

T - woman, artist, mother, friend, chef, musician, poet - has a rare and exceptional capacity for not shying away from the gritty, dazzling and oft-times shocking realities of life and death. I admire her greatly for this and, too, for the ways in which her poems engage fearlessly with Truth - her own and the collective's. Hers are tenacious poems, poems that ask questions, that mine, probe and penetrate with deep integrity; the same can be said of Seamus Heaney's work. There are times when, reading T's poems, I sense his presence in the room, too.

Seamus Heaney is considered my many to be one of the great Fathers of Poetry. I commend T's homage to him and her late husband, Mark - Seamus Heaney on the Bathroom Wall - to you. You will notice that today's Limit of Spectacle Lake is dedicated to her late father, Walter James Clear - another reason why I chose this poem instead of Pond for today.

A suite of six of T's poems were recently published online in the journal Cascadia Review - do visit this site to read them? Several of my favorites are there, including Abandoned Apple Orchard, Earthquake with Forty Pianos and Pond. 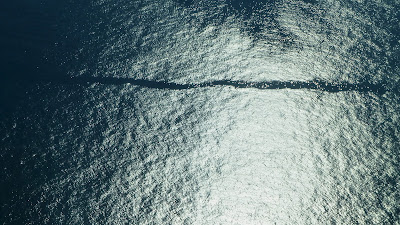 . . . he trusted in the end of all filtering light - T. Clear
(Photographs/paintings by CB)

"Driving today, after work, in dimming light along Lake Washington, the blue bruised water ruckled-up in the wind, the maples and alders side of the road in every shade of red/orange/yellow.  A swathe of rainbow to the north, a concentrated lump of color sitting just at the horizon. The sky beyond: velvet charcoal.

I kept shouting:
"I live here!"

I've driven that stretch of road so many times, it's easy to take it for granted. Easy to admit to a certain ordinariness in what is never ordinary, never the same from day to day, from hour to hour.

Easy to dismiss the forward-thinking gods who delivered me back to this city that I love, and to whom I say:

This week's editor on the Tuesday Poem hub is Helen McKinlay with the poem Matangi Tai - a powerful testament to a vulnerable man, sorely wronged - by Samoan-born poet, novelist and health activist, Sia Figiel -

Over on the TP hub, Helen writes, "I am always looking for poetry which speaks of the indigenous origins of the poet. Poetry which springs from the poet’s deep love for their homeland; its culture, its beliefs and its values.  Poetry which sometimes bears the scars of conflict, but never bears a grudge…poetry which makes us laugh from the belly and cry from the heart. A few weeks back I found such a poem: Songs of the fat brown woman, and began a search for the poet. . . "

To read Sia's poem for Matangi Tai and to learn more about her and her work, please click on the quill.

Posted by Claire Beynon at 4:02 PM