REPOST | BEFORE THE BEGINNING OF YEARS by Algernon Charles Swinburne (1865)

Last night I immersed myself in two hour-long documentaries on the life of Father Bede Griffiths. These films are part of a rich archive of study material for an online programme I signed up for several months ago. The films pose a great many questions and today prompt me to do something dear Marylinn does from time to time - namely, repost a piece from 'the archives' that blog stats indicate has been repeatedly revisited. We wonder how and why this happens? Certainly, I have appreciated being put in touch with stories-of-old again, for the themes they highlight, the patterns they reveal.

Who was it who said, 'We are our stories'? In the original post - a little over a year ago - Mary McC used the word 'wrought' in reference to the 'life material' I'd uncovered. I appreciated her choice of word, indicating as it does the 'forged-in-fire' process Life is. We are continually in the making.  Staying with the story metaphor, we are changed in the telling and re-telling of our stories.  Every choice we make and every experience we have forms, informs and reforms us. There'd be something seriously amiss if it didn't. The implications in this are profound; we are the same people we were a decade ago, a year ago, a day or an hour ago and, too, entirely, utterly different. Not only are the compositional ingredients of our body completely replaced every seven years so that we are physiologically, biologically and structurally renewed, but our psychic, spiritual and emotional interiors are engaged in corresponding processes of a similarly transformative nature. If something doesn't change - and transform through that changing - it effectively dies? In this way we are in constant and dynamic process, a recurring combination/application/ministration of flame and heat, of chipping and sanding, welding and refining.

We find ourselves scorched and broken, tested and found wanting. We understand. We do not understand. We understand. We weep and wail. We beat our breasts and gnash our teeth. We despair. We laugh. We rejoice. We dance on light's edge and, too, spend long periods burrowing through darkness, picking over the pieces in our personal compost heap and roaming - we trust, productively - the shadowlands. We attach so as to learn to let go. We detach so that we can learn to give more generously, more authentically engage. It is not enough just to know 'about' these things, or to 'visit' these places. We have, it seems, to fully inhabit them in order for the gifts to make themselves known and the lessons to find purchase. To quote Roethke, 'We wake to sleep and take our waking slow. We learn by going where we have to go'.

I first encountered Before The Beginning Of Years in 1980 - in Norton's Anthology of Modern Verse. At the time I was a student at the University of Natal, Pietermaritzburg, studying Fine Arts, Latin, Classical Civilization and English. I've kept Swinburne's poem (written in 1856) within arms' reach ever since. As far back as I can remember I've taped it to the walls of my studio - it's probably hung in every studio I've worked in. So saying, I seem to have misplaced it recently and spent some time today trying to find it. 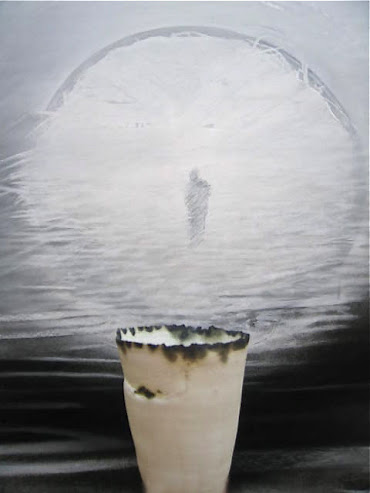 Anyway, I spent the next couple of months on my own - well, no, I wasn't entirely on my own. I shared the cottage with my cat, Count Cumulus. I grew veggies, walked, talked to pigs and cows and otherwise spent long, satisfying hours working towards my first solo show. I loved living out there - the huge skies, skudding clouds and wild fecundity of the place. Within a week or two of P's leaving, I discovered I was pregnant. I thrived, deeply content in the knowledge of my growing babe and found myself entranced by the surprise of full breasts and a rounding belly. Everywhere I looked I found rhythms - echoes between my inner and outer landscapes. This short period of productivity and paradise came to an abrupt end after two grueling murders were committed within unsettling proximity of the farm. I decided it would be unwise to stay and, within twenty-four hours of the second death, had packed up my few belongings, my studio materials and cat and moved to the city. The curator of my first-ever dealer gallery kindly offered me her spare rental flat for a few weeks while I hunted for a suitable place to stay. I had an exhibition to produce and was thoroughly nest-y at the time; am not sure what I'd have done had K not stepped in and offered me that temporary shelter. I hung Swinburne's poem on the wall opposite my king-sized mattress in K's very small street-front flat (our mattress lived on the floor in those days). I drew and painted all day, read and played music to my belly at night, ate kilograms of citrus and drank litres of rooibos tea (loose twigs, with honey).

Before long, I found a small, affordable garden cottage to move into in Randburg (one of Johannesburg's Northern suburbs) and taped Swinburne to the wall behind P's empty - and patiently waiting - desk in the spare back room I'd chosen to make my studio. From there, the same (rapidly-yellowing) scroll moved with me to the shed that became my workspace in our whitewashed home in Kenilworth, Cape Town. Our family had expanded to five by then. In 1994, we moved to New Zealand; the poem came, too, of course. It spent several months on a container at sea (a little like me) and when our belongings arrived and we'd unpacked, I took it down the hill to the second floor studio I'd signed a lease on in George Street, downtown Dunedin. We - the poem and I - settled into that space and stayed there for seven years - we left reluctantly when my landlord decided to double my rent (inner city apartments were becoming The Thing) and I moved on to another place; next came a rather derelict two-roomed studio in a neglected old building at the bottom of Jetty Street. I didn't stay there long - less than two years - but, despite the isolation (the building was tucked under the armpit of an over-bridge in the older, largely uninhabited part of town), my stint in Jetty Street was one of the most productive periods of my working life. In 2003 I moved to the old harbour-side villa I live and work in today. The Swinburne Scroll came with me, of course. I've had it out and up since moving to 22; it has to be here somewhere. . . 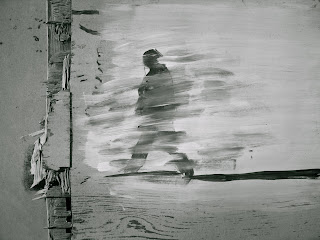 (I'm happy to report I found my original Swinburne Scroll.)