ASHORE ON ANCHOR ISLAND
In most parts the woods are so over run with supple-Jacks
that it is impossible to force one’s way amongst them. . .
Wm Wales, Journal, 1773

(unhook your boot from)


duck
(under)
each loop or trailing
tangle of cable:
real bush wiring!
No inspector
would pass it – but listen
to that hi-fi music
of wind voices
water notes
birdsong…
No birdsong? 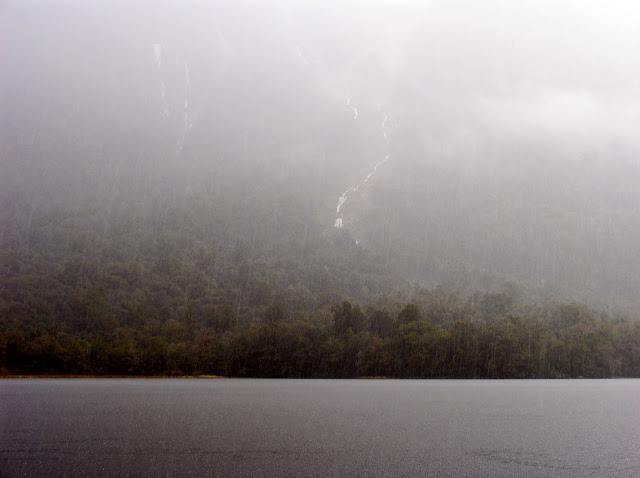 NIGHT RUN FROM DUSKY
For Ruth and Lance Shaw

In the Resolution’s wake, we leave
Breaksea astern, by failing light
on a plummeting glass, the everyday
‘prodigious swell’ from the south-west,
and four hours to make First Arm, Snug Cove.

By now, Cook was hove to for the night
‘3-4 Leagues’ off his ‘Doubtfull Harbour’,
as was their practice, ‘that we might neither
meet with or pass any land in the dark’.
Coasting, we set our course to do both,

as his prudence, and our diesel, permit.
Ruth has the watch. I watch her read
auto-pilot, compass, radar, scan
for lights on the port bow, and note
our Gardner engine’s dependable rhythm.

I follow the radar’s quiet conversation
with what we know but is invisible:
Coal River, and the entrance to Dagg Sound,
while one red and one masthead light become
a blip safely six kilometres to port.

And now two distant flashes every fifteen
interminable seconds, to let us know
what and where it is: it is of course
the light on South West Point; there’s nothing else.
Lance takes the helm, and with a touch

tightens the radar’s range, to bring us
between the rugged Hares Ears and the Point
that Capitan Malaspina named Febrero
when he first charted Cook’s ‘Puerto Dudoso’.
The screen compels us, and I watch as

remorselessly the rocks crowd in
to port, to starboard – then all at once
disappear astern. Lance turns the wheel
to make Fiordland spin through ninety degrees
as Patea Passage and the Sound

open, and mountains close around us.
In Snug Cove, our Doubtful destination, twenty
fathoms of anchor-chain roar out: then, silence.
Tomorrow’s gale but a flicker of lightning,
the Breaksea Girl tugs at her anchor.


Listening to Jim Mora interviewing poet Sam Hunt on NZ's National Radio, Alan Roddick - washing dishes at the time, his hands immersed in sudsy water - found himself reflecting on how long he and his wife, Pat, had known Sam.  He sent me this bio note a little later that day - "I had poems accepted by Landfall while still at school, and some years later edited the YC (Concert) programme’s monthly ‘Poetry’ programme for four years. I was the first to broadcast Sam Hunt reading his own poems, at a time when NZBC considered Sam’s voice unacceptable for radio, and wanted to use an actor instead. And I still cherish the memory of serving on the Literary Fund Advisory Committee when it read in typescript, and voted to fund, The Bone People. I suspect I have been a very lucky man, not least to be still writing new poems. . . "


Alan is a retired public health dentist living in Dunedin. His poems and reviews have appeared in NZ periodicals over the past 50 years, and his collection The Eye Corrects was published by Blackwell & Janet Paul in 1967. As Charles Brasch’s literary executor, Alan edited Brasch’s posthumous collection Home Ground (1974) and his Collected Poems ten years later. His critical study Allen Curnow was published in 1980 by Oxford University Press. He is a trustee of the Caselberg Trust at Broad Bay, on the Otago Peninsula.

I first met Alan in October 2007 when we both had the good fortune of participating in a waterborne residency organized by the Caselberg Trust. Nine of us - artists, writers, a composer and filmmaker - spent six days and nights on board a conservation yacht, The Breaksea Girl. Ruth and Lance Shaw - the then-owners of the boat - know the craggy coastline and dark waterways of Western Fiordland as intimately as we know our back gardens. This is ancient, largely uninhabited terrain - James Cook's coastline. The names given to the islands, coves and rivers are themselves poetry - Dusky and Doubtful Sounds. Snug Cove. Camelot River. Thrum Cap. Deep Cove. Many Islands. Astronomer's Point. Cascade Cove. Resolution and Secretary Islands. Wet Jacket and Crooked Arm. Foot Arm and Toe Cove.

Filmmaker Mark Orton (whose sense of humour and choice of music I think you'll appreciate) put together these vids. of what was an altogether remarkable place, time and experience ---

This week's editor on the TP hub is curator Mary McCallum with When The Sister Walks by Sarah Jane Barnett.   Sarah's first collection - A Man Runs Into A Woman - was launched last month.

When The Sister Walks is from her death row series. "The series is a fascinating one - the poems are simple and nail sharp and continue to scrape and dig and prod long after you've read them. So back you go, and there they are -- inevitable, disturbing, moving every time." Mary McCallum