The strawberries when I first remember them are not red but blue, that blue flare, before the whitehot part of the wire, sun glancing from the points of waves. It was the heat that made things blue like that, rage, I went into the waste orchard because I did not want to talk to you or even see you, I wanted instead to do something small and useful that I was good at. It was June, there were mosquitos, I stirred them up as I pushed aside the higher stems, but I didn't care, I was immune, all that adrenalin kept them away, and if not I was in the mood for minor lacerations. I don't get angry like that any more. I almost miss it.

I'd like to say I saw everything through a haze of red; which is not true. Nothing was hazy. Everything was very clear, clearer than usual, my hands with the stained nails, the sunlight falling on the ground through the apple-tree branches, each leaf, each white five petalled yellow centred flower and conical fine-haried dark red multi-seeded dwarf berry rendering itself in dry flat two dimensional detail, like background foliage by one of the crazier Victorian painters, just before the invention of the camera; and at some time during that hour, though not for the whole hour, I forgot what things were called and saw instead what they are. 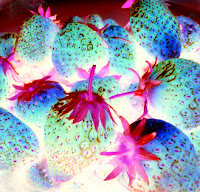 Friday 22 June is National Flash Fiction Day in New Zealand. Some of the Tuesday Poets will therefore be posting flash fiction this week instead of poetry. To quote Michelle Elvy (editor over on the Tuesday Poem hub this week and judge of this year's NFFD Competition), "If you're not sure about flash fiction, think short short fiction - usually stories up to 500 words are considered flash fiction - sometimes as long as 1000 but more often ever shorter, in the 250 - 300 range."

Click on the quill to read Michelle's flash fiction post - Bomb by Sian Williams - and from there follow the links to discover what our Tuesday Poets are up to this week.

Posted by Claire Beynon at 1:35 PM