Tuesday Poem - Before The Beginning Of Years by Algernon Charles Swinburne

I first encountered Before The Beginning Of Years in 1980, in Norton's Anthology of Modern Verse. At the time I was a student at the University of Natal, Pietermaritzburg, studying Fine Arts, Latin, Classical Civilization and English. I've kept Swinburne's poem (written in 1856) within arms' reach ever since. As far back as I can remember I've taped it to the walls of my studio - it's probably hung in every studio I've worked in. So saying, I seem to have misplaced it recently and spent some time today trying to find it. 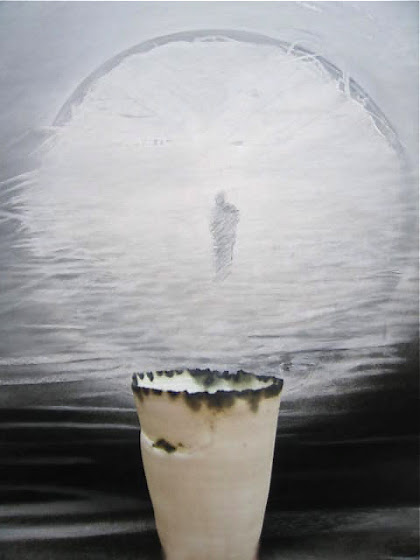 Anyway, I spent the next couple of months on my own - well, no, I wasn't entirely on my own. I had my cat, Count Cumulus. I grew veggies, walked, talked to pigs and cows and otherwise spent long, satisfying hours working towards my first solo show. I loved living out there - the huge skies, skudding clouds and wild fecundity of the place. Within a week or two of P's leaving, I discovered I was pregnant. I thrived, deeply content in the knowledge of my growing babe and found myself entranced by the surprise of full breasts and a rounding belly. Everywhere I looked I found rhythms - echoes between my inner and outer landscapes. This short period of productivity and paradise came to an abrupt end after two grueling murders were committed within unsettling proximity of the farm. I decided it would be unwise to stay and, within twenty-four hours of the second death, had packed up my few belongings, my studio materials and cat and moved to the city. The curator of my first-ever dealer gallery kindly offered me her spare rental flat for a few weeks while I hunted for a suitable place to stay. I had an exhibition to produce and was thoroughly nest-y at the time; am not sure what I'd have done had K not stepped in and offered me that temporary shelter. I hung Swinburne's poem on the wall opposite my king-sized mattress in K's very small street-front flat (our mattress lived on the floor in those days). I drew and painted all day, read and played music to my belly at night, ate kilograms of citrus and drank litres of rooibos tea (loose twigs, with honey).

Before long, I found a small, affordable garden cottage to move into in Randburg (one of Johannesburg's Northern suburbs) and taped Swinburne to the wall behind P's empty - and patiently waiting - desk in the spare back room I'd chosen to make my studio. From there, the same (rapidly-yellowing) scroll moved with me to the shed that became my workspace in our whitewashed home in Kenilworth, Cape Town. Our family had expanded to five by then. In 1994, we moved to New Zealand; the poem came, too, of course. It spent several months on a container at sea (a little like me) and when our belongings arrived and we'd unpacked, I took it down the hill to the second floor studio I'd signed a lease on in George Street, downtown Dunedin. We - the poem and I - settled into that space and stayed there for seven years - we left reluctantly when my landlord decided to double my rent (inner city apartments were becoming The Thing) and I moved on to another place; next came a rather derelict two-roomed studio in a neglected old building at the bottom of Jetty Street. I didn't stay there long - less than two years - but, despite the isolation (the building was tucked under the armpit of an over-bridge in the older, largely uninhabited part of town), my stint in Jetty Street was once of the most productive periods of my working life. In 2003 I moved to the old harbour-side villa I live and work in today. The Swinburne Scroll came with me, of course. I've had it out and up since moving to 22; it's got to be here somewhere. . . 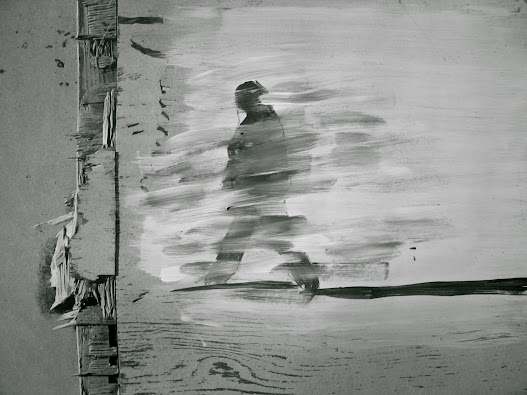 This week's editor on the Tuesday Poem hub is yours truly. I have chosen Ripe Fruit by South African writer Ruben Mowszcowski.

You may remember I featured Ruben's searingly evocative poem Karoo Moon on All Finite Things a couple of weeks ago. (Incidentally, Karoo Moon received more reader 'hits' in a week than any other Tuesday poem I've posted. It was interesting taking a look at my stats - something I rarely do. Apparently Stanley Kubrick's The Layers has had 1103 page views since it was posted here on 1 March 2011!)

One reader of Karoo Moon sent me a private message in which he said the poem had startled him, brought him 'back to source', set him back on track.

Click on the quill to savour Ruben's Ripe Fruit and an exciting selection of poems from around the globe. . .