In March this year, my youngest son, Tomas, (twenty-one-going-on-six-hundred-and-seventeen) left New Zealand to seek his fortune on the other side of the world. He has just returned to the UK after a three-week adventure in Morocco - an adventure his whanau back home are looking forward to hearing about! Tomas is easily the most self-contained person I know - a quality I admire and celebrate - and (yes, 'and' not 'but') one I very occasionally lament; he's, shall we say, unconventional when it comes to staying in touch - an opportunity for some us to practice patience? In time Tomas will regale us with his stories; his way is to fully inhabit the present moment, to dwell in the vivid details of a place or experience, absorbing the subtler textures of it all so that when he comes to write about it further down the track, everything's 'right there' as if it just happened. His letters, when they come, are well worth waiting for.
(As an aside. . . have you noticed how when we live in time, we worry less about all manner of things - and that living in time, we are generally on time?)
When we was a very small boy, Tomas developed a passion for All Things Egypt and - a year or two after that - for paper and paper-construction. He tended to take to things on an all-or-nothing basis, which basically meant there was no stopping him if he was engaged and no starting him if he wasn't! Paper-folding pushed his 'on' button. Over many months of intense engagement, he developed methods that were exacting and delicate; sometimes his creations were closer to engineering than origami. I loved - loved - watching his complex constructions taking shape. He'd spend hours measuring, tearing, folding, unfolding, glueing, reinforcing, adding bits, removing others, building, dismantling, rebuilding. . . such patience! The addition of wire, balsa wood, batteries and small motors allowed him to animate them and take his ideas in fanciful directions. For him, construction, function and process were what it was all about - he seldom, if ever, spent time decorating or embellishing the things he made.  He'd make them, get them to work then move on to the next project. We shared our space with a cast of eclectic, eccentric things.
Anyway, this is a very long introduction to this week's Tuesday Poem! Tender memories have a way of taking us on unexpected detours. . .
FOLDING THE WORLD
for Tomas, aged six
My boy is captive to paper, mesmerized
by the crisp wafer crackle and bright
wrapper wrinkle of his tissue paper
playground; abandoned old telephone
books, corrugated cardboard fortresses,
towering newspaper pyramids.
He wraps, creases, folds his world.
His bedroom walls are busy sky
grazed by paper darts. A hundred planes
fly head-to-tail in a steady clockwise
stream; West to East they score
lines of latitude behind blue
unblinking eyes.
Seams in our old yellow wallpaper
are time-keepers marking strict, straight
lines of longitude. He crosses one, two
three time zones in a single journey
around the room - no instruments
required to fly his tri-planes, bi-planes,
classic and boxoid gliders, parrots,
hawks, level-track deltas, fighter jets
and - every now and then - an airborne
origami elephant.
Tomorrow - perhaps - he will fold
winged sycamore seeds, construct a camel,
design a paper boomerang.
Tonight he will crumple in sleep, dream
of Tutankhamun and a flimsy shrine
of gold leaf and turquoise.
He will wake with the desert wind
on his breath, whisper tales of Osiris,
Isis, papyrus and dates. He does not falter
in his fondness for scarabs nor question
his small boy's thirst for the deep wet
fragrance of pomegranates.
CB 1998/2011 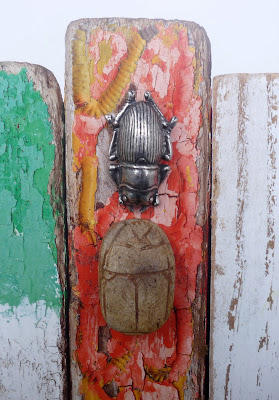 For this week's Tuesday Poems, please click on the quill.

In recognition of the tenth anniversary of 9/11 this week, TP curator Mary McCallum has posted a film on the hub; listen to New Jersey poet Deborah Garrison reading four poems she wrote in response to this life-altering event.
May Peace Prevail
Posted by Claire Beynon at 9:25 AM