Tuesday Poem - At Home In Antarctica

It's that time of the year again - August/September marks the beginning of the summer research season in Antarctica. The annual migration has started. Originally 'destined' to accompany my old team of scientists and ice divers down to New Harbor field camp this coming season, I will not in fact be going South this year. I will be staying home instead - and it feels right so. The resonances from previous seasons will endure for a lifetime. Besides, I can't help feeling increasingly conflicted by our presence in Antarctica. . . (Would I stand by that statement had I never been there? Or if circumstances were different this year? All things considered, yes, I believe I would.)
It's no secret that I was one of those who fell in love with the white continent the moment I set eyes on her. I still feel an ache of homesickness for her from time to time. There are places skin, eyes and heart cannot un-remember. 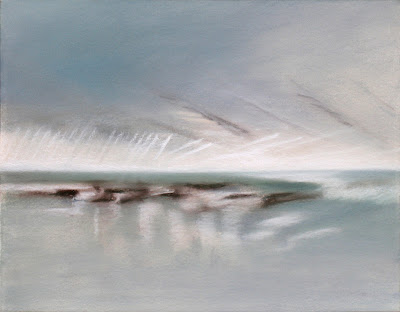 Where there is ice, there is music iv - Pastel on paper - CB 2009
AT HOME IN ANTARCTICA
In this place, silence has a voice
wide-ranging as the continent.
Some say it’s on the cusp
of madness, the way it hums
and stutters, mutters to itself
in quietest tones.
In this place, nostalgia
roams, patient as slow hands
on skin, transparent
as melt-water. Nights are light
and long. Shadows settle
on the shoulders of air.
In this place, the universe
brims. Inside absence,
presence. Inside distance,
dust and our sleeping earth
dreaming beneath her thin blue
mask of ice.
Time steps out of line
here, stops to thaw
the frozen hearts of icebergs.
Sleep isn’t always easy in this place
where the sun stays up all night
and silence has a voice. 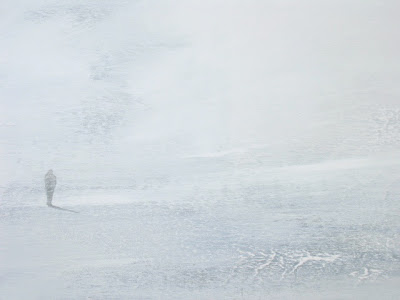 For more Tuesday Poems please click on the quill.
My turn to be editor on the TP hub this week. . .
I have chosen Miner's Cook by fellow NZ artist and poet Meliors Simms.