Tuesday Poem - Did you know?

Did you know
spiders do their housework
on Tuesdays in Canterbury?
They hang their silk on particles
of dust, a low-slung cloud,
any available hook
of air or charged electron.
Threads are pinned to telephone wires,
shredded vestments shaken out
and strewn to lie across the tops
of orange poplars. By five, the sun
is loosely tacked behind
a thousand spiders'
webs. It's quite a sight
when they turn the night-light on
inside the mountains.
CB
Did you know? was the first poem I posted on this blog as part of our Tuesday Poem series - the date was 30 March 2010. I'm posting it again today because Christchurch and our friends in the Canterbury region continue to be very much in heart and mind. As part of this, I'm working on a series of small drawings/paintings for a group show that opens in Christchurch next Friday, 12 August. One of the images incorporates this poem. I want to offer something hopeful, a kind of beacon to the people and to our land's inherent beauty and strength. I also want to say something about to our capacity to endure and to heal, despite external and internal shaking, and despite damage incurred to infrastructures.
For the past decade I have shown my work in Christchurch at The Arthouse - a stunning, cathedral-like gallery with an open heart and calm, deeply-centered energy located in Gloucester Street on the edge of the city's CBD. I have been blessed to work - and walk - closely with Norma and Peter, the directors of The Arthouse, ever since my first show with them ten years ago. Their gallery (new, custom-designed and built to highest earthquake codes) stood up well to the September earthquake but was irreparably damaged in the February quake; months of ongoing aftershocks have weakened even the noblest of buildings' resolve.
A few weeks ago, the gallery was officially declared unstable and given 'the red sticker'; it is one of an ever-growing company of buildings scheduled to be demolished in the near future.
Mysterious processes are always at work, even when we do not fully understand what these might mean, or what they will ultimately reveal to us. Norma and Peter have remained faithful to this ethos throughout these past months of change and uncertainty. I bow to my dear friends in their strength during these vulnerable times. They continue to keep a strong presence via their website and have hosted a series of online exhibitions. For their forthcoming show, En Masse - the first 'in the flesh' since February - a Christchurch business with premises in a steadier part of town are making a space available to The  Arthouse for a 'pop-up' show - a generous endorsement of Norma and Peter's wish to gather with their artists and the community for a show of optimism, good faith and solidarity. Yes.
I've needed to make a work - or works - about 'all this'; work that speaks to Now. The following drawing - Murmur - is one I completed over the weekend. 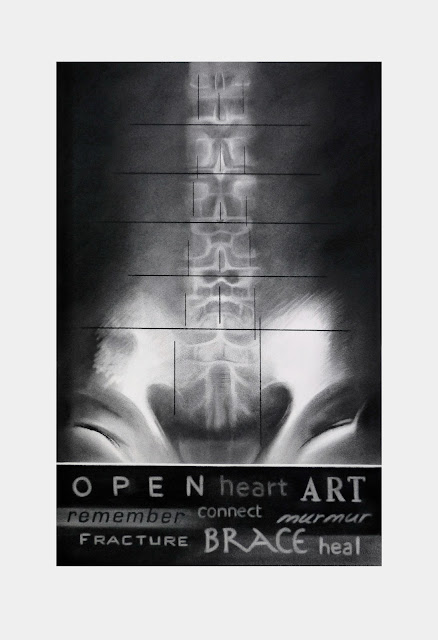 As so often happens, I begin with an idea, thinking I'll have some say in the matter, but it quickly becomes clear that  drawings have their own intentions. I often don't know what'll appear on the page. It's a mysterious process, one that never ceases to fascinate and fortify. Murmur feels a little strange to me, like a landscape I need to spend more time with - even so, something's opening up, I think. . . Why, just days ago, I wrote of my concern that after too many months of fractured time in the studio, I would not be able to make anything at all happen. I had looked at my frustrated hands one close-of-day and thought 'you're not going to betray me, are you? Not after all these years?'  Melissa Green sent loving encouragements, reminding me that our hands do not 'betray' us, though they do sometimes need to 'sleep'.
I'm getting side-tracked, though. It's Tuesday and I'm supposed to be posting a poem. Going back to where I started, which was to do with the fact that today's poem Did You Know? was the first I posted as part of the TP series, I wanted to mention that the comments thread accompanying that earlier post contains the stirrings of today's TP community. The conversation's about whether and how we might be able to make Tuesday poems a regular, co-ordinated 'happening' - a treat to be reminded of its origins. . . Mary McCallum was - is - the helmsman of our TP boat. She's a treasure.
Posted by Claire Beynon at 11:40 AM

Email ThisBlogThis!Share to TwitterShare to FacebookShare to Pinterest
Labels: Christchurch, Did you know, Mary McCallum, Murmur, N and P, The Arthouse, Tuesday Poem