Hello. I'm back from the Land of Strange, feeling a combination of expanded and numb-tongued. Life - how well we all know this - is a curiously logical and illogical unfolding; sacking and silk, petals and thorns woven and worn together.
Certain real-life tales belong to others and are theirs alone to tell; our purpose and privilege, to be there, to link arms and walk mindfully, noiselessly alongside - one foot in front of the other; one in front of the other. Waiting. Holding. Listening.
At times fire and ferocity are called for - called forth, too. Sooner or later, everything that must finds its place.
*
On Friday night, a spectacular fireworks display over Wellington harbour lit up the sky, expressing much that's not articulable in words; we - my daughter, her boyfriend and I - stood entranced as light streamed through darkness, whistling, whirring, cascading, exploding. We watched order and symmetry set chaos to rights, held our breath as intricate constellations of blue, red, gold and green formed, disintegrated, reformed. Fire and light illuminated planes, buildings and boats and sent smoke clouds scudding; timing was everything - and just right.
After the drama, the darkness that settled was energized, expectant. Awake. 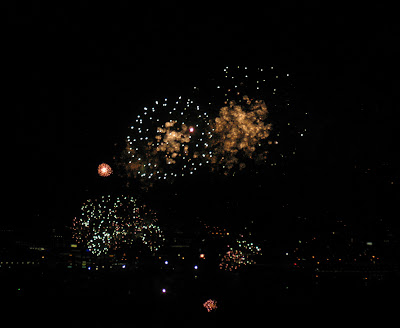 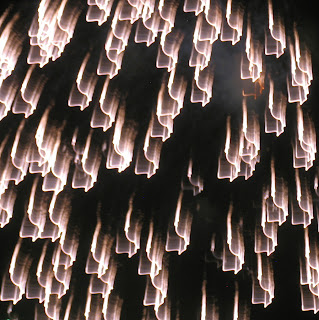 Cameras yield up surprises; they sometimes see things we don't - or can't - with our restless eyes. This is especially so when subject and object are moving at a pace and there's a wide repertoire of elements requiring attention and focus. . . On Friday evening, my camera found a light-filled figure, supported in her walk by a sea of transparent stepping stones, a quiver of arrows pressed to her chest like a bouquet of flowers - a breastplate. 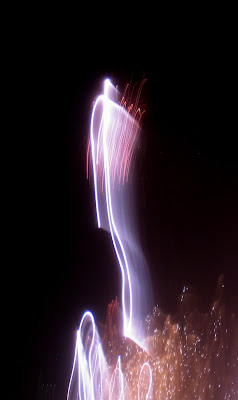 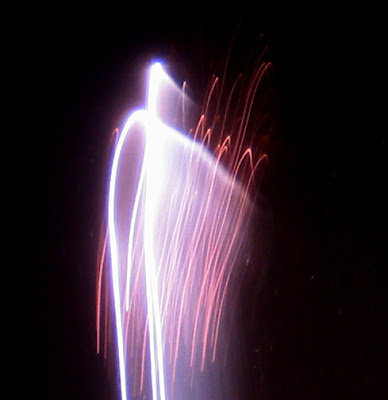 The light traces left behind by these fireworks remind me of the fireflies' frenzied mating dance I witnessed with my friend Katherine beside the Du Toit's Kloof River in South Africa in 2006. . . a time in my life when I needed no convincing of magic, mystery and the transformative power of love. I feel once again touched - and fortified - by this promise. Thankful, too. I wonder . . . might this constitute a kind of faith? 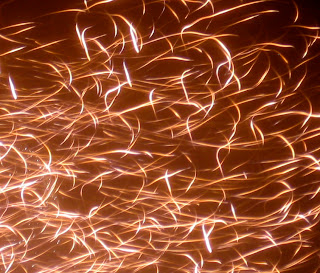 The light traces also remind me of bees and pollen, weaver birds' nests, hay bales and hair.
Samson relied on his hair for strength. Well - perhaps because I'm neither Samson nor Delilah, nor all that biblically well-behaved - I've decided to cut mine off. Also for reasons of strength. . . my Leo mane is now short. 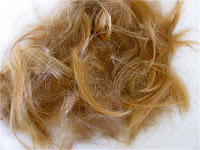 And isn't hair the oddest thing? We think of it as alive so long as it's attached to our body but it becomes something entirely 'other' the moment it falls to the ground or into the bathroom basin. When it's not where it's supposed to be, it's lifeless. Redundant. Un-pretty. The same can be said of nail clippings. . . things that minutes before had their place belong suddenly in the bin, or are relegated to the past where they're no longer useful or relevant. (For what it's worth, I've placed my hair on the compost heap at the bottom of my garden - the birds might welcome something soft to line their nests?)

How true this seems to be of so many things? Redundancy, that is - or is it finitude, I mean?

And yet how untrue of so much else; especially those most precious, infinite non-material things that seem to have nothing whatsoever to do with form and timelines and whose nature is to endure come hell or high water, to live and thrive - no matter what? 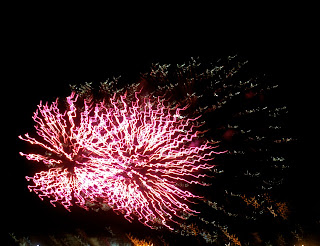 Posted by Claire Beynon at 9:44 AM