Consider the body, loud with sound
yet it must wait in silence. Explain
the mind so dense with words
it would mouth the alphabet into the lap
of a listening hand. Observe the heart alive
with language, yet without a single adjective
or verb to be found; no joining words, no
clever nouns lining up for the taking.

Notice the ear resting, as it does
on an outer edge, leaning against the dark
in a place older than speech. Listen. Hear
those swarms of echoes rising? They climb
the walls, pound the air. Imagine.
All that sound
and not a word out of it. 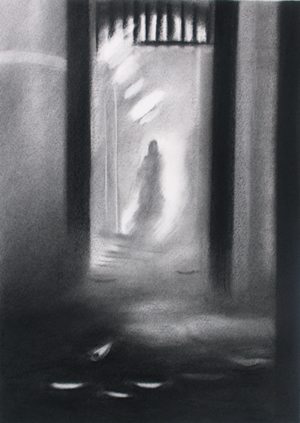 Over the weekend, I was thinking ahead to today's TP and got this poem typed up and ready to go. Then I found myself dithering, so I changed my mind and posted Rilke's Live the Question instead. And then I dithered some more. I've been like this lately - dithery. It's disconcerting. Indecisiveness tends not to be part of my usual modus operandi, but then again, neither is the deeply creeping fatigue that's been an unwelcome but insistent companion these past however many weeks. Words - both written and spoken - have been taking on peculiar shapes. They've looked strange on the page and sounded odd on the tongue. Sometimes ordinary language seems intent on eluding me altogether.

Anyway, when I woke in the wee hours this morning, I reached for my lapdog and started reading the first few Tuesday Poems that had been posted, beginning with T. Clear's chosen poem at the TP hub - The Shape of Words (desert love poem) by Odawni AJ Palmer. Each week's set of Tuesday poems seems to demonstrate an overarching pattern or unspoken understanding, suggesting our wider preoccupations are in synch. I find the way this expresses 'community' inspiring and comforting. Connections are made. Poems become bridges or stepping stones tossed into the oceans between North and South, East and West. Spontaneous conversations rise up. In light of all this, I've decided to keep Rilke for another time and to post Coaxing a bridge out of the sands of a desert as originally intended. (Whew, I eventually got there!)

Click here for more Tuesday poems
Posted by Claire Beynon at 6:31 AM