This morning, during a conversation with R in Australia, we found ourselves talking about time and how these days it seems as though events that occurred in our micro-worlds last week might as well have happened a decade ago - so strangely time's behaving... Do you find yourselves looking at the day that's immediately in front of you - or behind - and in it see all the density, variety and tonal range you'd ordinarily expect to find neatly distributed across a week, a month, a year. . . ? Life's a-jangle at the moment, a fact that can leave us faltering one minute and fitter for it the next. And just when we think we've got our dance steps sorted, the music speeds up, slows down or comes to a halt altogether. As individuals, and as a race, we're having to learn a whole new repertoire of moves. It's a little like alternating between an extended yoga pose and a high-impact karate sequence.
I've been on an interesting - home-based - journey this week. T in the States sent an e- last night saying "I trust everything's okay? I notice you haven't blogged since Tuesday..." to which I replied "I hope to post something later today; ideas have been brewing but everything seems to have a mind of its own these days, not to mention an independent timeframe, so who knows how long it will take for my next little ramble to take shape. The space between the A Cappella poem and whatever comes next seems integral to the story... "
Anyway, here I am, not really knowing what's going to come out on the page, other than that it will have something to do with the note B-flat.
Something deep inside me shifted and clicked into place this past week as a result of posting the A Cappella poem. The process began when the ever-discerning Mim expressed her wondering about a part of the poem (four lines from the end) where a colon after the word 'waver' acts as a kind of 'hinge.' The tone of the poem changes quite dramatically at this point and in the context of Chrissie's story, the colon suggested we'd reached a kind of threshold. John and Helen shared Mim's wondering (might the poem in fact end there?) - and I was inclined to agree with the three.
It was at this point that an entirely 'other' journey began. . . I'm not sure I have any words to add to those already written in the comments thread following that Tuesday's post, so rather than re-write the story as it unfolded there, I'm including a link to that conversation.
One thing leads to another. The internet community really is a remarkable one. A day or two after I'd posted A Cappella, a local Dunedin man (who, as far as I know, is a regular reader of the Tuesday Poems), sent me a message via Facebook - "Hey Claire, re; your latest Tuesday poem, somewhere, someone says that B-flat is the sound pervading the universe (providing you tune in!")
This gave me goosebumps; in the poem, the note Chrissie bounced into our women's laps was a B-flat and I'd referred to the "aural Aurora Nebula" as ". . . the sound of music taking wing/finding 'ephemeral purchase' in the world beyond the window. I thought then that I was alluding simply to sound waves and the way that, once released, they travel endlessly onwards, out into the universe. . . " 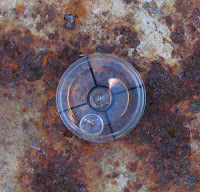 There was nothing for it but to get searching... On my meanderings, I came across some fascinating stories as well as various pieces of factual information; anecdotes ranged from the discovery that a massive black hole in the Perseus cluster of galaxies emits a B-flat note to a story about Buddhist meditators sounding a collective B-flat Om even when the separate notes they sing vary in tone and pitch. One site I came upon told a story about the (now documented) fact that for some unknown reason, the note B-flat causes alligators to bellow. No other note has the same effect on these creatures.
Here's an especially moving and poetic extract from an article in the New York Times -

'. . . Astronomers say they have heard the sound of a black hole singing. And what it is singing, and perhaps has been singing for more than two billion years, they say, is B flat -- a B flat 57 octaves lower than middle C.

The ''notes'' appear as pressure waves roiling and spreading as a result of outbursts from a supermassive black hole through a hot thin gas that fills the Perseus cluster of galaxies, 250 million light-years distant. They are 30,000 light-years across and have a period of oscillation of 10 million years. By comparison, the deepest, lowest notes that humans can hear have a period of about one-twentieth of a second.

The black hole is playing ''the lowest note in the universe,'' said Dr. Andrew Fabian, an X-ray astronomer at the Institute for Astronomy at Cambridge University in England. . . '

Another site referred to this song as our universe's "longest symphony." Yet another referred to the idea that healing properties are inherent in the vibrations emitted by the note B-flat.

The list of positive stories and B-flat attributes is long and inspiring. In B-flat , for example, is a collaborative project initiated by musician Darren Solomon. You can read his story here. 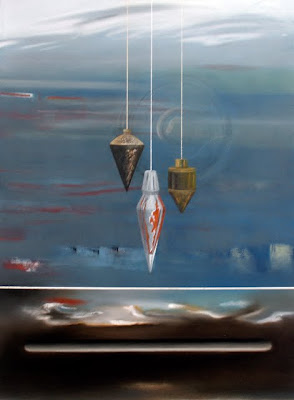 from Questions of Balance - Oil, liquin & pastel on paper - CB 2009
I can't help wondering what change might be effected in the world if we all took it on ourselves to light a candle each morning or evening and spent a minute or two humming a B-flat? We might not be designed to get down as low as 57 octaves below Middle C, but the range that's available to us is wide enough for every one of us to find a register that's comfortable. Is it daft to consider that global unification and healing might be as simple (and as complex) as us joining together in song?
Posted by Claire Beynon at 3:11 PM