I've just been listening to the news and am sitting now with a tight throat and a knot in my solar plexus.
Our world's airwaves are clogged with stories of war, incest, murder, Facebook deviants, paedophilia - and, of course, the devastating oil spill in the Gulf of Mexico. This man-made disaster has all the toxicity and virulence of a very black plague; its full reach and impact, quite beyond our imagination.
This morning it was confirmed that the oil has entered the current we have all so hoped it would not, and is drifting North towards Florida Keys - oh god, no. What have we done? What of the manatees? And the turtles? And the corals and fish and anemones and plankton and brine shrimp and foraminifera... What of the birds? And the fragile communities of plants and animals living on the intertidal zone and all along those shores? I feel deeply, ongoingly shaken by our appalling capacity for willful devastation. Such glorious creatures we can be; so tender, fierce for love, compassionate, attentive, courageous and nurturing. But oh, how blithely we underestimate our shadow, our inbuilt propensity for blindness, self-delusion, mindless, large-scale destruction. What irreparable havoc we are capable of unleashing.
W. B. Yeats's poem is stampeding around inside my chest ---
Turning and turning in the widening gyre
The falcon cannot hear the falconer;
Things fall apart; the centre cannot hold;
Mere anarchy is loosed upon the world,
The blood-dimmed tide is loosed, and everywhere
The ceremony of innocence is drowned. . . 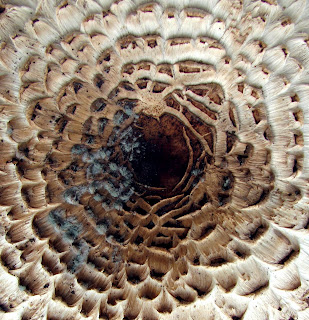 As a way of reminding myself to look more closely and listen more attentively, I'm thinking of posting a weekly series of 'mystery images' that shine a light on the surface landscapes of ordinary, every day things. I invite you to join me in this quasi-meditation on our natural world...
Here's the first one - 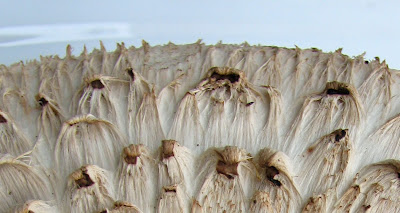