Changing to stay the same

I'm chewing on a piece of non-fiction writing at the moment. It's reached the 'happy shambles' stage; hence my breaking away for a quick blog.
The background research for this essay/memoir has taken me on a journey into worlds populated by such thrilling concepts as noosphere* and autopoiesis.**
Amongst the books on my pile are Labyrinth by Peter Pesic, Ernst Haeckel's magnificent Art Forms from the Ocean (his exquisitely observed and rendered drawings - from 1862 - are enough to make a gal heady) and 'What is Life?' by Lynn Margulis and Dorion Sagan. 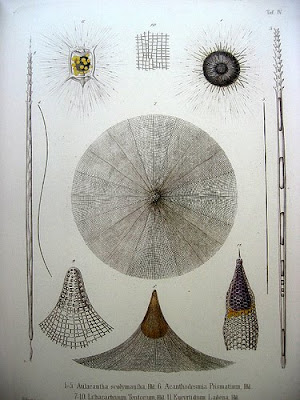 from Ernst Haeckel's Art Forms of the Ocean
Whilst roaming the internet, I happened upon an inspirational site; Anita Bruce is a UK-based artist whose work is largely prompted by Haeckel's biology atlas; using fine natural thread, she creates complex colonies of plankton, coral and starfish. Thematically, this links in with a global movement of people currently working with textiles in related ways, almost all of them drawing our attention to pressing environmental questions.
Going back to Lynn Margulis and Dorion Sagan's book, here are two brief excerpts to tantalize...
"So, what is life? Life is a material process, sifting and surfing over matter like a strange, slow wave. It is a controlled, artistic chaos, a set of chemical reactions so staggeringly complex that more than eighty million years ago it produced the mammalian brain that now, in human form, composes love letters and uses silicon computers to calculate the temperature of matter at the origin of the universe. Life, moreover, appears to be on the verge of perceiving for the first time its strange but true place in an inexorably evolving cosmos..."
and
"... So, what is life? Life is evolutionary exuberance; it is what happens when expanding populations of sensing, active organisms knock up against each other and work things out. Life is animals at play. It is a marvel of inventions for cooling and warming, collecting and dispersing, eating and evading, wooing and deceiving. Life is awareness and responsiveness; it is consciousness and even self-consciousness. Life, historical contingency and wily curiosity, is the flapping fin and soaring wing of animal ingenuity, the avant-garde of the connected biosphere epitomized by Kingdom Animalia... "
Expansive, optimistic, boundary-pushing stuff.
><
* For Teilhard, the noosphere is best described as a sort of 'collective consciousness' of human-beings. It emerges through and is constituted by the interaction of human minds. The noosphere has grown in step with the organization of the human mass in relation to itself as it populates the earth. As mankind organizes itself in more complex social networks, the higher the noosphere will grow in awareness. This is an extension of Teilhard's Law of Complexity/Consciousness, the law describing the nature of evolution in the universe. Teilhard argued that the noosphere is growing towards an even greater integration and unification, culminating in the Omega point, which he saw as the goal of history. The goal of history, then, is an apex of thought/consciousness.
** the essence of which means 'changing to stay the same.' Autopoiesis is a term that applies as much to the single cell as to the biosphere. Applied to species, it leads to evolution.
Posted by Claire Beynon at 4:44 PM