This is a transcript from Sunday night's Pecha Kucha presentation - a little long as a blog entry, but a welcome opportunity for me to synthesize certain aspects of a rich and significant period of my life.
>< 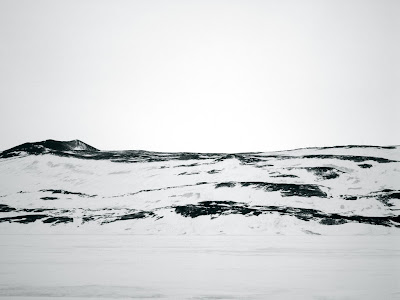 It has been my joy and privilege to travel to Antarctica twice in the past three years. As a place - and as a metaphor - the continent and its community have altered me and my way of being in the world. Antarctica epitomizes the back-to-back existence of constancy and change, devastation and transformation. The landscape draws and re-draws itself, an echo perhaps of the processes we are called on to practice and refine in our lives.

Last year, during my second season on the ice, I took along an unusual assortment of 'props for projects.' Along with the expected things like notebooks, camera and pencils, I packed a flotilla of 97 gessoed and painted paper boats and, too, thirteen high-fired porcelain bell vessels (the latter made by Cape Town artist, Katherine Glenday.). When gently struck with a soft-headed tympanum-type stick, these vessels emit a range of resonant bell-like tones. My scientist collaborator friend, Sam, and I played and recorded these instruments in as many research sites and weather conditions as time and imagination allowed, the intention being to incorporate these recordings as sound tracks in a series of short art and ArtScience films... 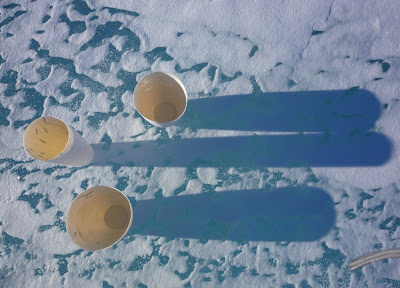 A collection of porcelain sculptures also accompanied us down to the ice. South African artist Christina Bryer was inspired to create this series of exquisitely fragile forms when she encountered the structural and mathematical complexity of the microscopic aquatic organisms - Foraminifera - that Sam and his fellow researchers have been studying in Explorers Cove waters for the past quarter of a century.
It struck me recently that I have a penchant for things that begin with the letter P - people, place, paper, punctuation, paint, pastels, protists, prime numbers, poetry, pattern, portals, poppies, pistachios - and, of course, passion itself. By the time I get to the end of this conversation, hopefully there will be a portrait of the White Continent that is more than bare bones. 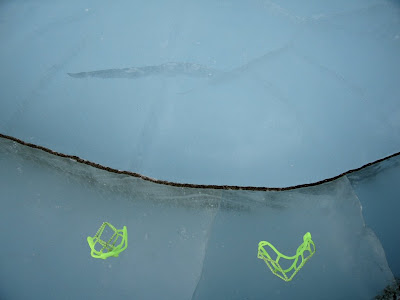 With the sea ice like polished glass in places, it is necessary to wear crampons when out walking. These occasionally 'sproing' off one's boots and land in oddly configured shapes on the blue. 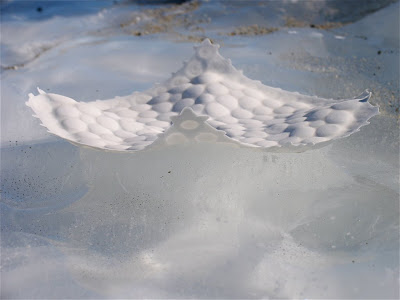 Antarctica is alive with stories. In the image above, one of Christina's porcelain pieces alludes to a legend that tells of a rare, snow-white petrel that flies both Arctic and Antarctic skies. Skuas (tenacious, and - I think - largely misunderstood survivors) prey on these petrels and will devour everything but the bone that spans their shoulders and defines their wings. When all is said and done, what's left of the petrel drifts to the ground like fallen angels' wings. It's a gruesome, but somehow tender image. 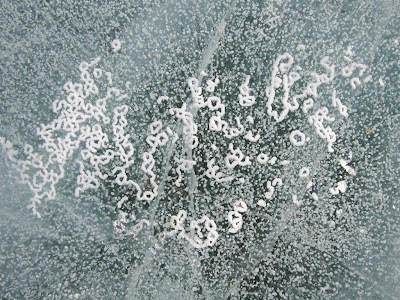 When salt, oxygen and ice get together, the collaborative artistry they demonstrate is extraordinary. Above, alphabet soup.... 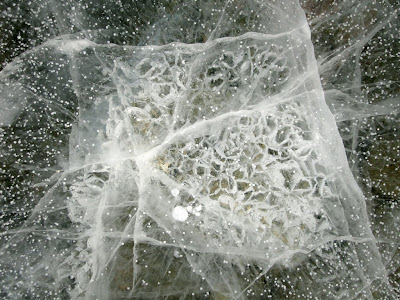 and here, an elaborately filagree-d lattice formed as a result of subtle changes in temperature in the ice's internal and external structures; this small beauty found snap-frozen above the algal mats in Lake Hoare.
From above, to below the ice (my thanks to Shawn Harper for the following two images)... divers enter a surreal, dreamlike space where forms become quasi-weightless and silence reigns even more supreme than it does in the world above. Research divers (Sam Bowser, Henry Kaiser, Steve Clabeusch, Cecil Chin and Shawn Harper) set my flotilla of boats adrift in this mysterious 'other' place, then filmed them voyaging in communal groups as well as 'going solo.' The implied metaphors are self-explanatory. 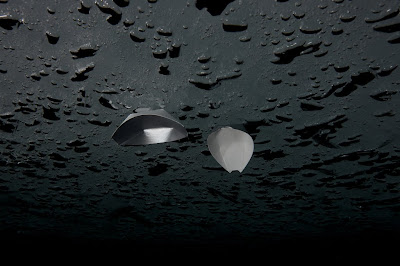 Photograph - Shawn Harper
Sam, Shawn and Henry also took Katherine and Christina's porcelain forms beneath the ice, 80 feet down to the cold ocean floor. Transported upwards by way of trapped bubbles, they - the vessels and boats - drifted in slow motion up to the ice ceiling.
When I was in the US last month, Sam and I teamed up our exceptionally generous and gifted videographer friend, Mary Lynn Price and embarked on learning a raft of film-editing skills required for further work with the glorious film footage captured on these dives. 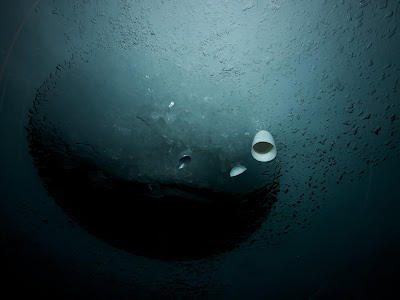 Photograph - Shawn Harper
Each day, walking around our camp, or on the way out to the dive sites, we would pass things tragic, triumphant, amusing, magnicent... the 'skin map' shown here is the pelt of a mummified seal estimated to be around six hundred years old. 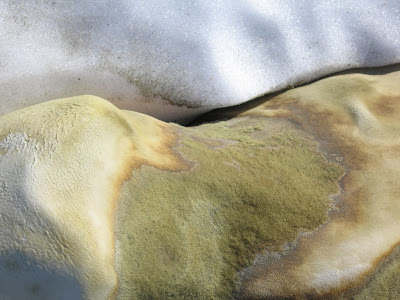 And every once in a while, an ice rabbit - 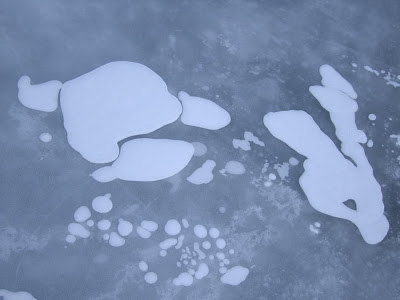 The following 'belly button of the Canada Glacier' made me think of our Moeraki boulders - each landscape, an archive of hidden secrets, neither one in any hurry to deliver itself of its charge, till suddenly - or so it seems - there they are; rocks/blueprints no longer sheltered but exposed to the dazzling reality of the outside world. 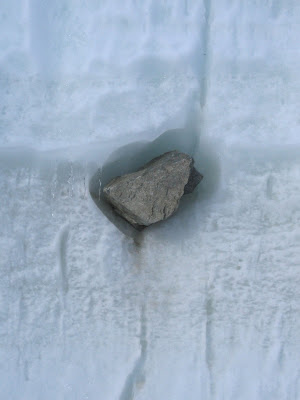 Portals always get me wondering - this one, a 'closed opening' on the carcass of a crashed plane near Pegasus airfield. No one died in the accident. Somewhat absurdly, a man named Dave from Dunedin had scratched an 'I was here' announcement into the plane's tail rudder. 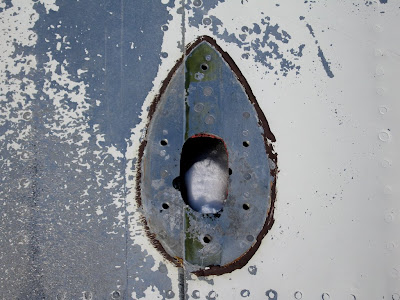 Sometimes, in the solitude of that vast wilderness space, the ice conspired to keep one company. . . 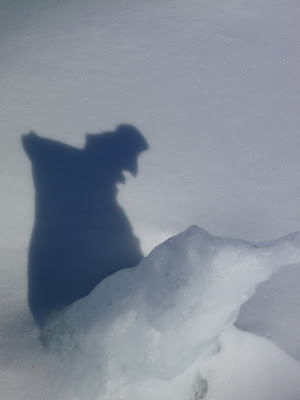 Victoria Finlay wrote (in Colour - Travels through the paintbox), "I had thought, when I set out on my travels... that I would somehow find, in the original stories of colours, something pure. It was a naive Garden of Eden moment, and of course I forgot about the rainbow serpent that had to be there in order to make it a real paradise." 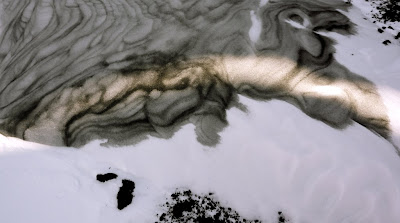 I have always been moved by surfaces weathering. This fondness extends as much to things decaying as it does to the aging human face. I'm inclined to think that evidence of weather equals the truth of the story. 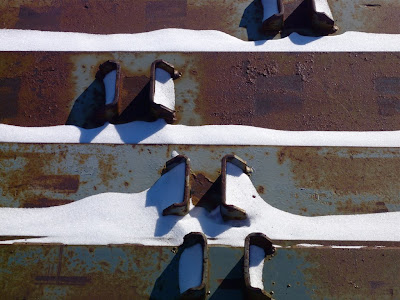 Aah, man and the environment. Never a more fragile, urgent relationship than now. How often resistance and compliance go hand-in-hand; it's a process that calls for pause... 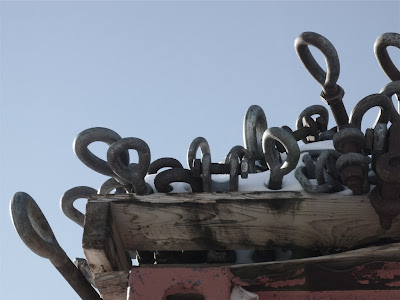 ... which brings me to my conclusion. This last photograph was taken in McMurdo base, not long before I left the continent for the final time. I was lured outside by a strange and haunting sound. The wind had come up and for some reason had set the small town's communication network humming. I hadn't heard harmonics quite like this before - neither will I hear them again. It occurred to me that for the briefest yet immeasurable moment, the elements and our well-intentioned, but oh-so-clumsy human presence had met throat-to-throat and were harmonizing. 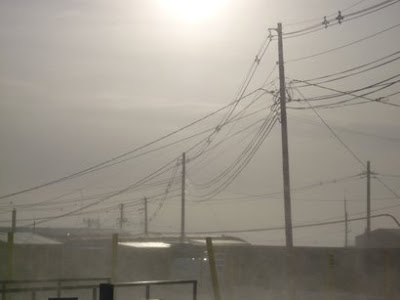 I slept like a child that night, the continent's lullaby in my ears.
><
Let this be my quiet, true note of thanks.
Posted by Claire Beynon at 9:58 PM