It's something of a surprise to me to realize that we're already well into March.
I arrived home from the States this weekend and have been doing what my grandfather called 'rustling.' For Pa, rustling meant pottering in his own space: paying attention to things like the stone collection in his study, tidying his drawers or processing the paperwork on his desk. My homecoming has been about some of that to be sure, but there's been a deeper process at work, too. A wall came down in my house while I was away (by design, rather than by accident) so I've returned to a much-altered space. Building is always an interesting metaphor... how often do we find the events in our external world mirror those of our inner one - and vice versa? Suffice to say I'm in reflective mood, content to be back in the warm, if slightly chaotic, lap of home.
I've been more aware of rhythms and cycles than days and dates whilst traveling these past three or four weeks and have only just remembered that March is the month my Explorers Cove 'snapshot' (the criterion was that it be told in under 500 words) is to due to come out in UK-based magazine, * AnOther. I've just discovered it is in fact out there. It'll be published in hard copy, too, but this is the link to the online version. Hannah Lack is the editor for this special global project, something I was privileged to participate in at the end of last year whilst down in Antarctica.
The introduction to the travel-oriented 'Document' edition reads as follows -
'... This issue of AnOther Document - a literary magazine within a magazine - takes the spirit of travel and adventure as its theme, reaching out to writers and creatives across the world to explore, dream and discover.
Musician Adam Green writes a European tour diary, anti-tourist Daniel Kalder discovers Paradise in Texas, we climb a mountain with Robert Facfarlane, journey back in time to 70s Marrakech with Yves Saint Laurent, meet the subway train-chasers with Paris Review editor Nathaniel Rich, and cult director John Waters shares some sights of Los Angeles you won't find on the tourist map.
Finally, we bring together eight of the most exciting writers working around the world today to describe their view at exactly the same moment in time, capturing a Global Snapshot in Words.  What follows is a stimulating mix of truth and fiction, discussion and discovery...' 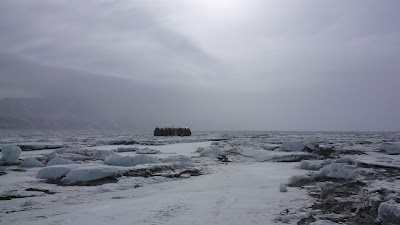 I've posted this photograph before, but include it again here because it was taken at 1.00AM on 27 November 2008, the date and time that coincided with the ed's nominated hour for writing. Sam and I each composed a snapshot that night - he scribed his from his cot in the Jamesway: I sat out on the sea ice to write mine.
The set of eight short stories (from Russia, Australia, South Africa, the UK, USA, Brazil, Germany and Antarctica) begin on page 27 of the mag. (you'll be offered the option of downloading the full issue as a pdf.). The preceding, more in-depth, articles are rich reading, too.
* AnOther is a terrific, innovative magazine whose categories of coverage range through Literature, the Arts, Fashion, People, Projects...
Posted by Claire Beynon at 7:59 AM