Winter beach, desolate. Wind-whipped, exhilarated, salt
air stings our faces. Sand, marshmallow-soft winkles
out our toes. A gull swoops low, querulous, edgy,
screaming at us, this is mine! We throw back our heads,
laughing, tease, it’s ours! But we know all this
is only ours to care for, our kaitiakitanga, as we pass,
pressing footprints into the wild, southern afternoon.

You see it first. A lumpish, static shape on the shoreline.
Kelp? Driftwood? An old jacket, lost long ago, returned
by the tide, hunched shoulders, bunched lining, seams
split by a careless shrug of sea? Our footsteps track to
the hump. Collars up, we huddle into curiosity. A pup
shark, dark biscuitchip eyes glazed with ancient fog,
leafbud ears. Kneeling, I whisper its beauty.

Perfect parabola, black velvet shading to ashy grey,
white belly curve stained with a blush of weeping pink.
Did the waves carry you here to finish your struggle,
lay you out on this cold sand slab, for us to marvel at,
as if wonder was a last rite we might perform for you?
Far out, at the edge of my spindrift mind you swim
again, intrepid, in a school of gliding fins.

"... Our harbour and peninsula held a special place in our friend Elizabeth’s heart. When we first met I was living in an old villa in Ravensbourne; the house stood - still stands - directly opposite the Lone Soldier. Many of you will be familiar with our harbour sentinel. I was intrigued by him – took to painting and photographing him in all-weathers and waving to him from my bathroom window. Then one morning in early 2009, a poem landed fully formed on the page, as if the soldier had somehow called it forth. It was a love poem. I took it along to our next writing meeting and read it to the group.

Fast forward several months - possibly even a year or two - and out of the blue, Elizabeth sent me a letter. 'I'm not sure how to tell you this,' she said, 'but the soldier has written a response to his poet.' She'd attached a Word document. As was her way, she had meticulously followed the same stanza- shapes and line- lengths as in the original poem; the voice of the soldier echoed back at me from his hill across the harbour. His words brought me to tears. And to laughter. I wrote straight back to her saying, ‘MsLiz, we have to do something with these poems – this pair, their relationship’.  And so we wove the two poems together, stanza by stanza; I added visuals and a music track and turned their conversation into a small film. Our mutual friend Paul Sorrell agreed to read Elizabeth’s soldier’s lines.

Elizabeth was a relationship-builder with a fierce sense of justice. An open-hearted warrior woman in a tiny physical frame, there was something utterly solid and reliable about her –

'If you call, I will answer'

— which is essentially the same reassurance - and invitation - the characters in these poems extend to one other and to each of us."* 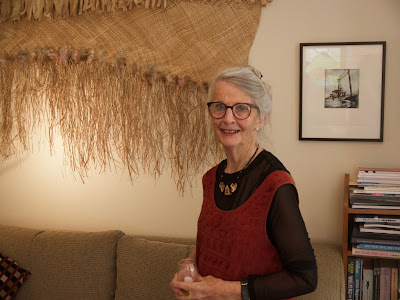 *excerpt from A Tribute to Elizabeth. Her memorial service was held in Dunedin on Saturday 7 September.

Posted by Claire Beynon at 8:18 AM

Email ThisBlogThis!Share to TwitterShare to FacebookShare to Pinterest
Labels: All This, for TDC, If you call I will answer, Rest in Peace dear E, The Soldier and the Poet