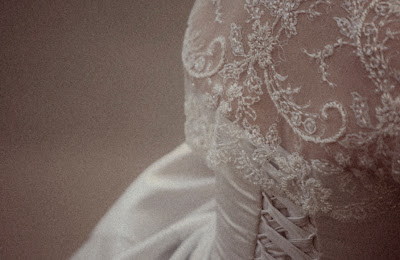 You hear the door slam
her car grumble away
know she’ll be gone long enough
to search through the shelves
the box should still be there
she’d never throw it away.

Each year she holds the dress against her body
asks, ‘Wasn’t I beautiful?’
You and Isobel will say, ‘You still are, Mum,’
as you watch her place her hope back in the cupboard.

When you were younger
Isobel was the princess-bride because she’s older
you, a lady in waiting wrapped in a paisley shawl.

You put your school papers aside
listen for sounds of the car
footsteps on the porch
the house cathedral still
Isobel at school
on your desk the Lady of Shalott essay lies finished.

You open the cupboard door as though
an ancient squeak would matter
place the box on your bed
take off your sweater
your jeans
hold the brocade and pearls to your chest
slide the weight over your head
entwine desiccated white roses through your hair
stand in front of the mirror
know you are that lady
seeing shadows of the world.

You place the box back deep on its shelf
as careful as those other times
read your essay again, know it’s good
hear your mother screech open the door
call to you
‘Jonah, I’m home.’

A few words on The Dress from Martha: "Because inspiration comes hard these days, a friend occasionally sends me a word to ignite the muse. When she suggested 'dress', I thought first of types---romantic black, religious grey, etc---and ended up remembering my old wedding dress my daughters and their friends used for play. The material was a light-weight cream brocade which led me to imagine a richer and heavier fabric of pearls and lace of earlier times that characters like the Lady of Shalott may have worn. The rest, the setting and drama, developed from that image."

Martha has a way of approaching serious, uncomfortable subjects from a wholly original vantage point, combining clarity and insight with acerbic humour and compassion. She can be sharp-tongued without showing the faintest hint of malice or unkindness.


Born in the United States, Martha immigrated to Dunedin in 1972. She taught high school English until 1999. Her poems and stories have been published in literary and popular magazines and anthologies.  Her first collection of poems, Staying Inside the Lines, was released in 2002. Together with four other poets - Kay Mackenzie-Cooke, Jenny Powell, Sue Wootton and moi - Martha founded the Dunedin open mic series, Upfront, spotlighting women poets. Pearson has published three of her books for teenagers, two of which are short story collections - Yeah! and EDGE/a cut of unreal; and a book of one-act plays - Let’s Hear it for the Winner! Three of her one-act plays were produced for Otago University’s 2003 Gay Pride week, and a full-length play, The Trials and Tribulations of Emily, based on New Zealand’s first woman doctor, was produced in 2007. Two of her stories have been on Radio New Zealand. She has had poems published in anthologies, literary and popular journals including The Listener, Landfall, Sport, Takahe, JAAM, Poetry New Zealand, and in on-line journals as well as in her collection, Staying Inside the Lines (Inkweed 2002).


A selection of her poems and images can be found at http://www.otago.ac.nz/deepsouth/2007/index.html (University of Otago, Deep South literary journal) and additional biographical information can be found in the Writers Profiles of the NZ Society of Authors pages - www.authors.org.nz.

(Thank you for The Dress, Martha.)