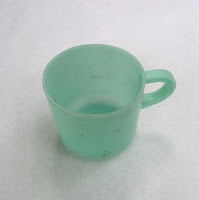 This small child's cup - 3 inches high, two and three-quarter inches in diameter - has been in my life for as long as I can remember. When I first wrapped my fingers around it I was three or four years old, waking to the delights of blackcurrant juice (can one still find Ribena in supermarkets, I wonder?), fresh mulberries, slipper-footed bantams and freshly-laid eggs.
The cup lived in a cupboard in my grandparents' kitchen where it shared space with an odd assortment of old metal baking tins, jelly moulds, a glass lemon squeezer and a collection of variously-shaped 1950s Twinco plastic drinking vessels. The smallest pale green one was my pick of the bunch and, if memory serves me well, the one I repeatedly chose over all the others. I would drink my Ribena tap-water-cool in summer, warmed-for-comfort in winter.

I can still smell that kitchen and the mysterious fragrances that emanated from its many cupboards - freshly-cut rhubarb and plucked-from-the-tree lemons, the particular smell of a damp-metal cheese grater, coffee grounds from the percolator (always at the ready on the back left plate of the stove), the dusty perfume of lumpy old marshmallows. . . (Marshmallows have never tasted better than the ones my grandmother kept in a tall lidded storage jar at the back of that cupboard; they were pale, stale and chewy. Perfect! Miraculously, that jar never emptied.)
When the time came for my grandparents to sell their rambling old house and move into a small  retirement village cottage, they went through the inevitable process of sifting and sorting, deciding what to take with them, what to pass on, what to send away to the auction. . . It must have been 1984. I would have been twenty-four at the time, newly married and expecting my first child. (I live so much in the present these days that my chronological memory quite often fails me; I recall the stories, with all the feelings and sensory details, but specific dates seem to elude me - does this happen to any of you?).
Young, idealistic and intent on living a simple, uncluttered life, there was very little I hankered for in the way of material things - but I did want that little green cup to come home with me from my grandparent's house. I wanted my children to grow up with it.
And so it was the cup came to live with us.

My then-husband and I started our married life in a converted tractor shed on a pig farm outside Johannesburg - a characterful, if unusual first abode. P was away more than he was home, tangled up in what was compulsory military service in those days; as a medic, he was spared from having to perform some of the more appalling duties but the army kept him away from home for several months at a stretch. During one such period, he was called away to serve time on the Caprivi Strip, a narrow, dissent-stricken belt of land on the North-Western tip of South West Africa (now Namibia), bordering on Angola, Botswana and Zambia. While he was away, two unrelated murders took place in Nooitgedacht, the rural area we were living in. Translated literally, Nooitgedacht means 'never thought of' and looking back at that time now, it was a pretty isolated spot. . . The first death took place a few miles from where I was living; the second occurred a week later on the farm adjoining ours.
I was pregnant with my daughter at the time, living out in the bundu*, sans husband. Another young family lived in the main farmhouse not all that far away from me, but they weren't exactly within easy calling distance. The day I learned about the second death, I set about packing our few belongings; I scooped up my clothes, our mattress and bedding, my furry companion (a cloud-coloured cat named Count Cumulus), my stash of art materials and drawing boards and - with my family's help - moved into a small flat in the city. I was working towards my first solo exhibition at the time - the flat belonged to the gallery owner and happened to be empty at the time.
But that's a whole other story. . .
Staying with the little green cup. . . my three children drank fruit juice and elbow-temperature rooibos tea from it during their growing years in Cape Town. It spent a decent bit of time in sandpits, garden and bath. When it wasn't in use, it lived on the window sill in our kitchen (holding parsley or flowers), otherwise with all the other plastic bits in the kitchen cupboard.

When our family of five moved to New Zealand in November 1994, the cup took on a new role as sugar scoop in a sugar bin. My ex-husband sold the family house at the end of last year and he and I spent several weeks sorting through the accumulations of two and a half decades lived out on two very different continents. Towards the end of the process - literally moments before we closed the door on that particular chapter of our lives - I remembered my childhood cup. I went through to the all-but-empty kitchen and there it was, nestled in amongst the sugar in the old bin, just as it had been for the previous fifteen years. I brought it home with me that night and use it every morning to scoop-and-scatter seed for the birds that visit my garden, brightening our world with their song. 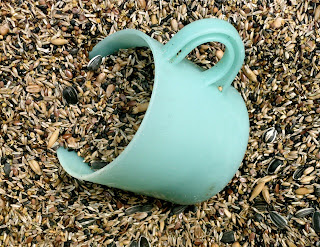 Few things remain the same, do they? Given all that's happened in the past forty-six/fifty-plus years, it's remarkable to me that this pale green plastic cup has survived; not only that, it looks exactly as it did when I was three or four years old. What a stalwart. So much of what I considered once-upon-a-time to be permanent, reliable, enduring - 'forever' - has in fact tumbled down, fallen away, cracked, crashed and burned. Other things have risen - are rising - up in their place.

The objects that remain are little more than prompts for memory, for the stories of our lives. The objects themselves aren't 'it.' It's the stories that dwell within them - within us - that live on and continue to imbue our time here with meaning.

Posted by Claire Beynon at 3:03 PM