"Suppose time is a circle bending back on itself. The world repeats itself , precisely, endlessly. For the most part, people do not know that they will live their lives over...'' (pg 8)
"There is a place where time stands still. Raindrops hang motionless in air. Pendulums of clocks float mid-swing. Dogs raise their muzzles in silent howls..."  (pg 70)
"A mushy brown peach is lifted from the garbage and placed on the table to pinken. It pinkens, it turns hard, it is carried in a shopping sack to the grocer's, put on a shelf, removed and crated, returned to the tree with pink blossoms. In this world, time flows backwards... " (pg 102)
These are various lines that open the succinct, time-defining (time-questioning) chapters in Einstein's Dreams by Alan Lightman. 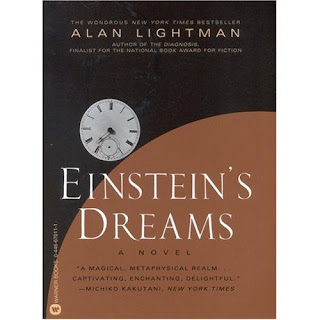 One of the popular global themes at the moment is 'living in the present.' The ideal is that by living in the present, one can still assimilate and integrate the past (without getting stuck there) and trust that - with a healthy dollop of proactivity on our parts - the future will unfold as it must. Lightman addresses time from a number of different angles. In each chapter, time is introduced as a unique concept with a peculiarly different set of characteristics. In one chapter, time is a sense. In another, a memory. He wanders and muses, opening the subject up rather than drawing any conclusions.
I reckon time is a gift, not a commodity and yet, we think (in our so-called civilized communities) that we can trade it, save it, promote it, bottle it, consume it... Not so! Apparently 'time' is one of the most frequently used words in the English language. It is also one of the most elusive and un-pin-down-able of subjects. I don't intend to go into it too much here - for now, I'll simply type up one of my favourite chapters in Lightman's book and leave it at that.
"In this world, there are two times. There is mechanical time and there is body time. The first is as rigid and metallic as a massive pendulum of iron that swings back and forth, back and forth, back and forth. The second squirms and wriggles like a bluefish in a bay. The first is unyielding, predetermined. The second makes up its mind as it goes along.

Many are convinced that mechanical time does not exist. When they pass the giant clock on the Kramgasse they do not see it; nor do they hear its chimes while sending packages on Postgasse or strolling between flowers on the Rosengarten. They wear watches on their wrists, but only as ornaments or as courtesies to those who would give timepieces as gifts. They do not keep clocks in their houses. Instead they listen to their heartbeats. They feel the rhythm of their moods and desires. Such people eat when they are hungry, go to their jobs at the millinery or chemist's whenever they wake from their sleep, make love all hours of the day. Such people laugh at the thought of mechanical time. They know that time struggles forward with a weight on its back when they are rushing an injured child to the hospital or bearing the gaze of a neighbour wronged. And they know too that time darts across the field of vision when they are eating well with friends or receiving praise or lying in the arms of a secret lover.
Then there are those who think their bodies don't exist. They live by mechanical time. They rise at seven o'clock in the morning. They eat their lunch at noon and their supper at six. They arrive at their appointments on time, precisely by the clock. They make love between eight and ten at night. They work forty hours a week, read the Sunday paper on Sunday, play chess on Tuesday nights. When their stomach growls, they look at their watch to see if it is time to eat. When they begin to lose themselves in a concert, they look at the clock above the stage to see when it will be time to go home. They know that the body is not a thing of wild magic, but a collection of chemicals, tissues, and nerve impulses. Thoughts are no more than electrical surges in the brain. Sexual arousal is no more than a flow of chemicals to certain nerve endings. Sadness is no more than a bit of acid transfixed in the cerebellum. In short, the body is a machine, subject to the same laws of electricity and mechanics as an electron or clock. As such, the body must be addressed in the language of physics. And if the body speaks, it is speaking only of so many levers and forces. The body is a thing to be ordered, not obeyed.
"Taking the night air along the river Aare, one sees evidence for two worlds in one. A boatman gauges his position on the dark but counting seconds drifted in the water's current. 'One, three metres. Two, six metres. Three, nine metres.' His voice cuts through the black in clean and certain syllables. Beneath a lamppost on the Nydegg Bridge, two brothers who have not seen each other for a year stand and drink and laugh. The bell of St. Vincent's cathedral sings ten times. In seconds, lights in the apartments lining Schifflaube wink out, in a perfect mechanized response, like the deductions of Euclid's geometry. Lying on the riverbank, two lovers look up lazily, awakened from a timeless sleep by the distant church bells, surprised to find that the night has come.
Where the two times meet, desperation. Where the two times go their separate ways, contentment. For, miraculously, a barrister, a nurse, a baker can make a world in either time, but not in both times. Each time is true, but the truths are not the same."
~~~
Oh, and HAPPY 200th BIRTHDAY, Charles Darwin!
Posted by Claire Beynon at 11:15 PM