During the last days of this season in Explorers Cove, I found myself hankering for two things - falling snow to soothe the parched and wretched-looking Dry Valleys' terrain, and a wind storm; the first for the soft edges it would bring to both landscape and psyche, the second to imprint on us one more time, the raw textures, timbres and sheer power of this place.
Snow came as bidden and fell, in giant, quiet flakes. It seemed to me it arrived when and as it did to unite our community of eight before our departure and, too, to restore something essential to each of us. 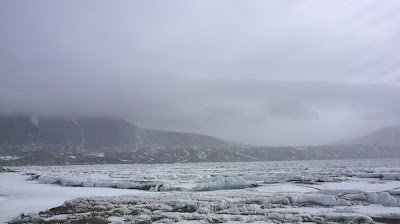 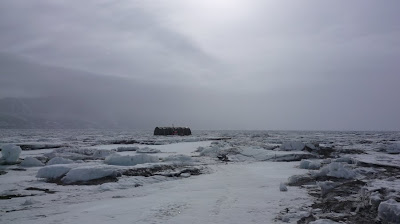 Twenty four hours later, the wind reacted to the silence and came stampeding down the valley to let its indignation be known. There was something rakish and adolescent about its approach; it came more in the mood for play and tantrums than outspoken brute force, bringing with it the customary kit-bag of noise, protest and dramatic display; the fresh snow was like chalk in its hands. Within a short space of time, this irascible wind had smudged, rumpled and erased all evidence of neat-and-tidy white, completely re-drawing the landscape around camp. 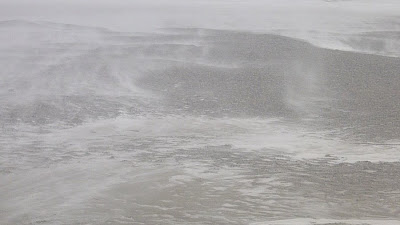 ~~~
Two weeks ago, Sam and I received an email from an editor in the UK with an invitation to participate in a rather special literary project. London-based magazine, Another had a wonderful idea - to create what they termed a Global snapshot in words. They invited one person on every continent to down their usual tools and link up with other writers around the world at the same time on the same day. We were asked to describe (in 300-500 words) the view in front of us at that particular moment. The designated hour was noon GMT on Thursday 27 November which,  in Antarctica, meant 1.00AM on Friday 28th. As it happened, this fell on the fulcrum between fresh snow and wind storm -  the universe conspires in mysterious ways!
Sam was content for me to be the scribe that night, so I sat out on the sea ice an hour post-midnight and wrote. The GPS coordinates of that private-yet-communal spot became the title of the piece. (I'm not yet sure when the final collection is due to appear, but will post something on this site just as soon as it's out.)
The collaborative, community-oriented nature of this project is what really touched me - our world is so in need of links and link-makers, for people and groups who seek to find the things that connect rather than divide us. I celebrate the ethos underpinning this composite creation and thank Another magazine for the opportunity to be a part of it.
Posted by Claire Beynon at 8:56 AM