Hei hei. It feels like eons since the last time I was here. Thank you for continuing to visit. . .
Today's (late, late, late) Tuesday Poem is a little out-of-the-ordinary. My previous entry carried mention of various online projects I've been immersed in lately; one of these is a collaborative (ad)venture titled A VAST SCALE - Evocations of Antarctica*.  AVS is a Ning community site created and managed by my Aussie-based friend and fellow Antarctican, Rupert Summerson and moi. If any of you are interested in participating or having a look-see, please let me know (either leave a comment here or email me at clarab@earthlight.co.nz) and I will send you the password to the site?
I'll say just a wee bit about A Vast Scale given that it relates to today's Tuesday Poem. Between us, Rupert and I created a series of short ice-related videos for the Ning site with the purpose of engendering discussion re; the Antarctic environment, sound/music and aesthetics; this is an informal research project whose focus is more on creative process, networking and subjective opinion than it is on hard-nosed statistics and conclusive findings. We'll be presenting a paper at the Antarctica Sound conference in Canberra next w-eek. I say w-eek because I was supposed to be boarding a plane to Australia first thing this morning (the red-eye flight from Christchurch) but - for various reasons - I canceled my flight and am staying home. Rupert and I have been hard at work on this project for several months. . . Our presentation will still go ahead, only now - instead of us sharing the podium - Rupert will be speaking in two part-harmony (one voice in a frock and the other in jacket & tie?). Thankfully, the internet has meant we've been able to construct, compose and co-ordinate this collaboration effectively over distance.
During my years of ArtScience collaboration with polar biologist, Sam Bowser, I developed an abiding fascination for the DNA and RNA sequences of the protists we were studying and found myself looking for ways to incorporate them in various art forms, and in various ways. . . As odd as this may sound, DNA and RNA sequences look to me like poetry; when I read them, I hear music. . . It seemed a good idea, then, to transcribe their sequences into quasi-musical notation - why not 'play' the protist's DNA?
So. . . Meet Gromia cf. oviformis, a microscopic hot-water-bottle-shaped single-celled critter abundant in Antarctic waters and the first of the protists we've paid 'musical attention' to. . . 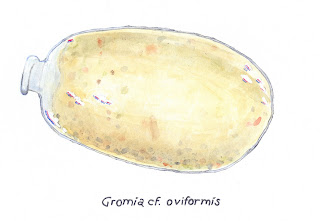 Watercolour painting by Sam Bowser
Gromia for whom home = the ocean floor closest to McMurdo Station, are lean and hungry-looking, while - for some yet-to-be-discovered reason - their relatives in Explorers Cove are spherical and fat. Same creatures, same species, same DNA sequence - and yet. . . (an interesting metaphor for our very own species?)
Below is an image of the RNA sequence for Gromia cf. oviformis. Rupert cleverly came up with a way to translate its various 4-letter configurations into musical notation, the result of which is an unusual, primitive and, I think, quite haunting piece of music. He will perform GromiaDNA on his Japanese shakuhachi in Canberra on Saturday, using the medium of sound to make a creature ordinarily invisible to the naked eye, visible. . . He'll play the sequence 'into' an atmospheric backdrop/stage set I've put together for the occasion - a 9min silent film of the eerie, icy waters inhabited by Gromia. I intend to post the film here later today. While some of the footage will be familiar to you from previous vids. (one of my wee boats makes an appearance - 'right-way-up' this time), there's plenty in it that's new. . . 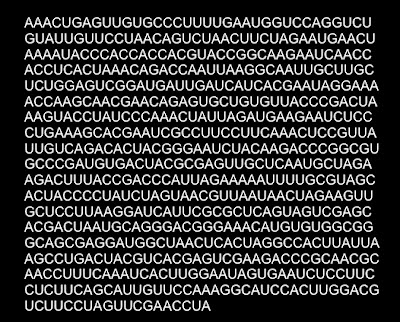 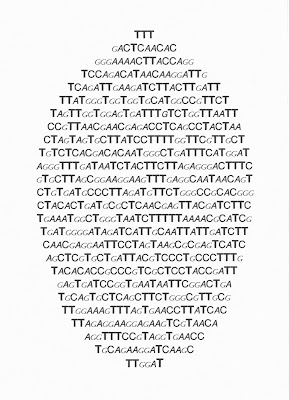 In these next few images, Gromia gametes encounter the poetry of their own make-up, survey their DNA. . . 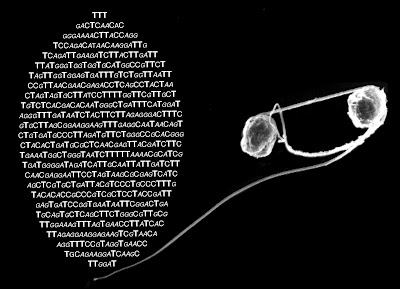 the encounter becomes a dance 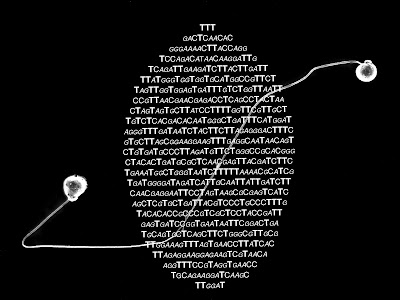 And - in keeping with the unpredictable nature of life - every so often a DNA sequence makes an impression on an unsuspecting pair of small white chairs. . . 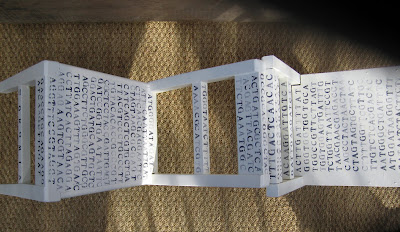 For more Tuesday Poems, please click on the quill. This week's editor is Helen Rickerby with Margot or Margaux, a viscerally lush poem by Anna Jackson.

* concrete poetry: poetry in which the meaning or effect is conveyed partly or wholly by visual means, using patterns of words or letters and other typographical devices.
Posted by Claire Beynon at 11:07 AM