This time last month, I was in the US. The conference in Arizona had 'happened'; I'd boarded a plane in Phoenix, flown across the continent and landed in Winthrop, Massachusetts - a small seaside town on the outskirts of Boston. Winthrop is home to our dear friend, Melissa Green. Yes, Melissa and I met -  really, truly. In the flesh. She opened her cosy, book-lined apartment to me for the time I was there; four graced days sped past  - it was like being in a waking dream. . .  We talked (heavens, did we talk?!), linked arms and walked along suburban streets, past forsythia, lilac and maple trees, down to her marsh where we sat awhile on her 'silvered pillar', wordless for a time in drizzle-mist; we bussed to the bakery in the rain, drank cappuccino and ate outrageously decadent pastries, and - on Tuesday 10 May, spent a delicious, head-spinning evening in the company of Susan L and Melissa S (see pics below). . . I met Bogey and Turnip (I beg your pardon, Tulip) and went stone-collecting with them and Melissa S on one of Boston's beaches. . . four stretchy days, fully inhabited. 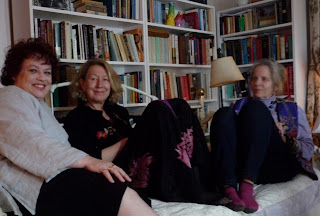 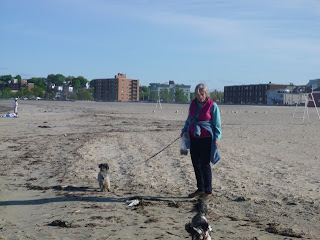 I took uncharacteristically few photographs during the time I was away; most of the pics I have are from the time in Winthrop. I'll post a handful more here to accompany excerpts from Melissa's finely-wrought meditations on her marsh - evocative word paintings indeed... 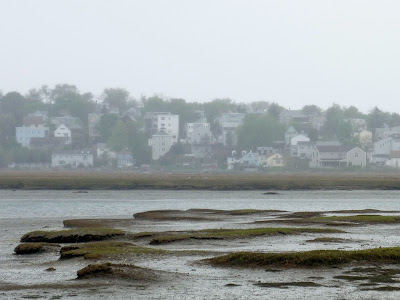 from The Marsh had become my muse  ". . . Lilac are out in great profusion now, and today, as it is not raining, I find I can take my time. I’ve discovered lately on my walks that whereas I used to pass beside the marsh on my way home, inhaling the smells of the sea, hoping to catch sight of a swan or heron in the fragmites bedded on the salt hay, the marsh now has become my destination.

As cold and miserable as the early spring was, even to the middle of May, I would sit on a water-soaked piling at the edge of the tideline, scanning the water for birds, I found I would suddenly hear Mad Maud’s voice scratching quite close to my ear. I would have to leap up, repeating the several lines over and over as I limped home so I would still have them when I got to my desk. It only happened twice that way. I did learn to stuff my coat pockets with a pen and a tiny notebook because it seemed then and seems to me now that being at the marsh on that fallen, silvered piling almost instantaneously frees my mind from its chatter, and the clean language of one of my projects almost dictates itself to me there. . . 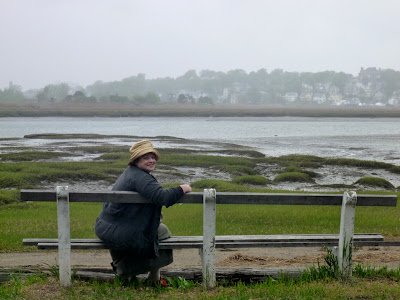 ". . . Great white meadows are scudding across the sky with speed over the marsh, and the tide as it is coming in is running with whitecaps. The silvered pillar I’m accustomed to sitting on I’ve just discovered is a railroad tie with large rusted iron spikes bent down into the grass. This comfortable, companionable log I’ve been using as my desk is a tie from the Narrow Gauge railway that circumscribed this little seaside town from before the turn of the nineteenth century. . ." (cont.)
"I wanted to see what the light was like and hear the evening birdsong. Low tide is the color of mercury and barely moves. As far as I can see the hummocks of grass are still bright in the softening air, the shade I think of as the pure sargassos of June. The sun which was a disk as flat as any dinner plate has been overrun by a large plume, wing feathers of dark gray clouds. The heron that was bobbing off to the east when I sat down has flown. . .
. . . I wanted to see what the light was like and hear the evening birdsong. It is the quiet that seems so vast, the rills of water between the hummocks of grass are motionless. There are no birds feeding in the marsh and not one breath of wind. I came to---what? Just to be here. Just to look and record the ordinariness and the rarities. I like to scry out changes if I can. It makes me feel part of this tiny portion of the natural world. I have liked the tides. They comfort me with their inevitable, unchanging trustworthiness. . ." 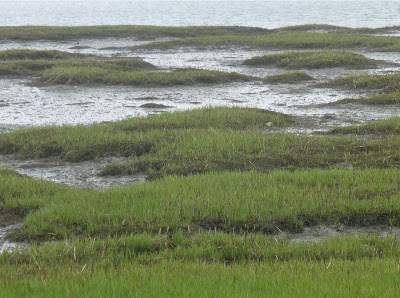 ". . . I rejoice at the ever-renewing life of this place, never knowing what I will find. Today it’s abundant with the singing of robins, sparrows, finches, red-winged black birds and mockingbirds, and the gurgling love noises of mating buffleheads. But now I know enough to come here with my notebook, and let my self lean back into the salt air as though it were dense enough to hold me--and perhaps it is--and I begin to write." (Read the full piece here)

Posted by Claire Beynon at 2:09 PM