Tomorrow, within hours of US President-Elect Barack Obama's inauguration, my youngest son will board a plane and fly North West from New Zealand to Hungary to embark on a semester's exchange at Corvinus University.

Parenting has to be one of life's most extravagant gifts and, too, one of its fiercest and - at times - ache-inducing learning opportunities. Certainly, it's a call to practice over and over again, the paradoxical dance of full engagement and compassionate detachment. I wholeheartedly celebrate my son going off on this exciting adventure, and at the same time... well, frankly - pang!

This evening, feeling somewhat tender-hearted, I came across the following translation of the eighth 'image' (I'm not sure what else to call it) from Lao Tzu's gentle Tao Te Ching - it covers a great deal of ground in its fourteen short lines, touching lightly on the ideal that we be as adaptable, unbinding and generous as possible in our affections. Also in there is the suggestion that straightforwardness and honesty in government are tantamount to goodness. In the same image multiple scenarios are addressed that might ordinarily be argued as being miles apart, their interchangeability making it seem perfectly normal to find them side-by-side. 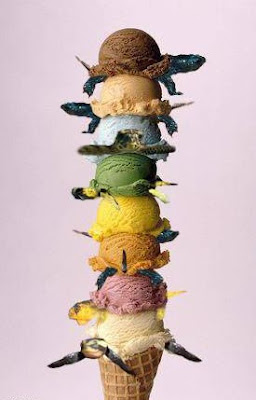 Affirmations are being passed around the blog-o-sphere in the form of an Inspiration Award. Vanda Symon at Overkill nominated Ice Lines for one (thank you, Vanda). It's my pleasure now to pass the scoop on to seven bloggers I find inspiring and whose sites I visit regularly.
This is a little like standing behind the ice cream counter in the local dairy, permission granted to stack my cone high. Imagine - I get to choose not one, not two, but seven favourite flavours. Delicious.
Here, then, is my blog ice cream (flavours piled in no particular order): lime, passionfruit, gold rush, boysenberry, apricot, mandarin and cookies-&-cream -
Kay's Made for Weather
Sam's Ice Labyrinth
Tony's thistonybridge
Laurice's greatkiwipoet
Pamela's shroedingerstabby
Vanda's Overkill
Steffi's Stuffysour (on the Nature network)
The idea of this award is that it gets passed it on to others, who in turn pass it on to others... There are a few guidelines for those participating - 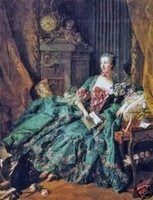 1. Please put the logo of the award on your blog.
2. Link to the person from whom you received the award.
3. Nominate 7 or more blog recipients.
4. Leave a message on their blogs to tell them.
Good will. Good fun. Enjoy!
Posted by Claire Beynon at 6:49 PM 3 comments:

'"... From a distance only the light is visible, a speeding gleaming horizontal angle, trumpet out on a hard bend. The note bells. The note bells the beauty of the stretching train that pulls the light in a long gold thread. It catches on the wheels, it flashes on the doors, that open and close, open and close, in commuter rhythm.
On the overcoats and briefcases, brooches and sighs, the light snags in rough-cut stones that stay unpolished. The man is busy, he hasn't time to see the light that burns his clothes and illuminates his shoulders with biblical zeal. His book is a plate of glass..."
(Jeanette Winterson - Art and Lies, pg 3)
~~~
This morning's email brought a message from Jeanette Winterson's website to say that her latest column is up for reading. JW is one of my all-time favourite people. She's one of those writers I feel a real affinity with, so that I find myself doing what I just did - referring to her as person first, writer second.  Of course, they're one and the same, but Jeanette is someone. I've admired her work for years, have read every book she's written (a number of them, several times) and am always left dazzled by her imagination, her craftsmanship, the courage, intelligence and passion expressed in her art. I'd love to have her over for dinner - or better still - invite her to stay sometime. In my imagination we'd talk for hours, and be companionably silent; we'd share a similar taste in food, make a beeline for our local Farmers' Market on Saturday mornings, enjoy picking herbs and berries from the garden. I'd take her down to the Caitlins where we'd walk the beaches and forest tracks barefoot.
Of course, I haven't actually met Jeanette - yet. Meantime, I look forward to visiting her updated site each month - it's a nourishing, generous place that you think you'll quickly pop in to, then find yourself still wandering around in an hour or two later. It's also a dynamic site, not exactly a place you nestle comfortably into: most visits leave me feeling stirred up, challenged, inspired and enlivened.
The last year or two have been a bit of a wrestle for her and while she's been prudent in terms of what she puts out into the public domain, she's also been transparent and gutsily honest with the grit and process of her life. I admire that. There's no room for veneer or pretense with her, which is both a gift and an exhortation to those of us on the receiving end of her words.
This morning's newsletter held the sad news of her Father (John William Winterson)'s death. She writes bravely of her loss and learning and of the healing power of reconciliation. And, in her inimitable way, she offers us some sage thoughts to reflect on.
Posted by Claire Beynon at 9:07 AM 1 comment:

Curiosity & the company of Heron-Allen

Edward Heron-Allen (b. London, 17 November 1861, d. 1943) is - or was - a fascinating man: a true polymath. His expertise ranged from violin-making to Cheiriosophy (another term for palmistry), linguistics to archeology, marine zoology to meteorology, esoteric studies to the successful cultivation of - who would have guessed - asparagus! He wrote extensively on all these subjects, contributing significantly, even then, to our current understanding re; foraminifera (the same complex uni-cellular aquatic organisms that Sam Bowser has been studying for the past twenty-five years. Click here to read a recent interview in Nature magazine.).
When Heron-Allen wasn't writing academic papers, investigating the paranormal or lecturing on the intricacies of violin-making, he was studying Persian. He translated the Persian classic Rubaiyat of Omar Khayyam into English, and too, The Lament of Baba Tahir (from its original, very obscure dialect, Luri). As if that wasn't more than enough to keep one man busy for a lifetime, Edward Heron-Allen adopted a pseudonym, Christopher Blayre, and set about becoming a prodigious writer of short stories (science fiction, the supernatural and quasi-erotica). In his ordinary everyday life, he was a lawyer, husband and father to two children.
The mind boggles.
As a scribe for The Heron-Allen Society has suggested, "If a serious biography of Heron-Allen were to be undertaken it would have to be the work of various hands. It is highly unlikely that any one biographer could have an informed appreciation of Heron-Allen's many and varied interests..."
In his book Practical Cheiriosophy, Heron-Allen wrote,
"If trouble can leave its marks upon the face, as Byron says, -
'The intersected lines of thought, -
Those furrows which the burning share
Of sorrow ploughs untimely there;
Scars of the lacerated mind,
Which the soul's war doth leave behind,'-
why should not the same effect be produced upon the hands, which are so much more sensitive than the face?"
Byron must have been in melancholic mood when he wrote that stanza. I agree with Heron-Allen, though, about our hands. I'm not sure I'd go as far as saying they're even 'more sensitive than the face' but I do think that between them, our hands and face hold all our stories.
I'm not really sure where I'm going with all this - there are many threads to this particular meander: Heron-Allen (and his myriad research subjects) has fascinated me for a wee while now: I've been following him around ever since I was first introduced to him in Explorers Cove three and a bit years ago. So, yes, there's that connection. And then there's the fact that his primary scientific preoccupation was foraminiferology - it's this that drove the hook right in. As I mentioned when writing from Antarctica, I'm currently working on various collaborative ArtScience projects that have at their core, foraminifera, so Heron-Allen makes logical, inspiring company.
Aside from all this, I'm enjoying 'dipping my feet into melt-water' and taking time to muse a little about 'curiosity' and where it leads us; what it is about something that ensures it will first capture, then hold, our attention? And what it is that defines a moment/event/encounter (often very early in the piece) as significant so that we're then prompted to move towards or away from it; to say yes, no, or not now, thank you?
Here's a pic of one of my favourite forams called Astrammina triangularis: I'm forever enthusing to Sam that this micro-organism is the perfect metaphor for our human individuation. 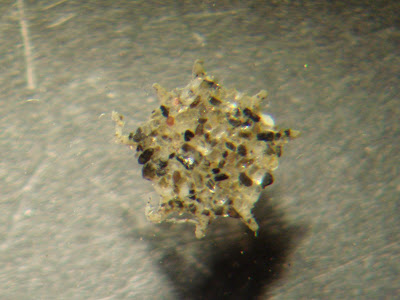 Photograph: Samuel Bowser
This tiny sediment-encrusted creature starts out life as a triangle and becomes progressively more complex as it grows older: entirely responsible for the construction and shape of the protective shell it lives within, it sends pseudopods ('sticky feelers') out into the environment, selects particles of sediment (to very precise sizes) for the purpose of building its shell, then creates an adhesive with which to bind these particles together. The ingredients that make up this 'glue' have so far left scientists confounded. In situ on the Antarctic ocean floor, it's shown itself to be waterproof and incredibly durable (these creatures are living fossils, having survived in essentially the same form for some 650 million years - i.e so long as there are healthy foraminiferan around, there's no expiry date on this adhesive). The glue also demonstrates remarkable tensile strength. And yet, the minute a sample is taken into a lab situation, it proves impossible to stabilize and literally gums up the equipment required to analyze it.
Anyway, to continue with the metaphor... as it matures, the A. triangularis grows additional apices, gradually extending its shape from a triangle into a square, from a square into a pentagon, from a pentagon into a hexagon, heptagon, octagon, nonagon and so on... and so on... The most complex triangularis found in Antarctica waters so far is twelve-sided.
Here's a reflected light micrograph image showing a community of A. triangularis specimens of varying ages and complexity - there can be no denying these organisms are sophisticated little masons. 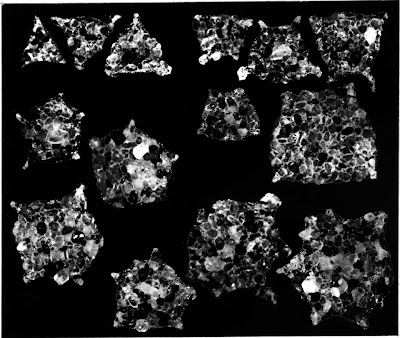 Plate I from Bowser et al. (2002) Journal of Foraminiferal Research 32:365
This week past, I went for two late afternoon walks along St. Clair beach, here in Dunedin. Each time, I 'happened upon' a bizarrely triangularis-like form, only instead of being constructed by single-celled creatures, these were bits of construction debris tumbled and shaped by the sea into objects I could pick up and appreciate. 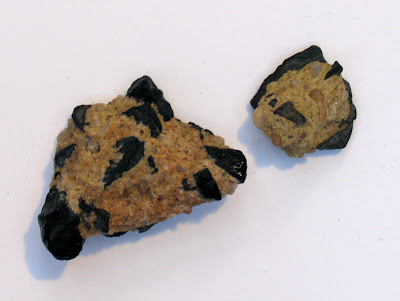 Believe it or not, it was these two small, beat-up (but beautiful, in-their-rough-and-ready-way) forms that unexpectedly gave rise to all these associations --- how often is this not the way with extraordinary ordinary things?
Posted by Claire Beynon at 11:50 AM 2 comments: