for Jeanette Winterson and Janet Frame

We have in common red hair, an appetite for oranges, a habit
of making characters out of computers, cast-iron baths and cats.

Tonight, I will presume friendship and arrange a birthday dinner.

Janet and I will come to you, Jeanette. A Northern Hemisphere dinner
under the eye of a lunar eclipse feels - what word will I choose - tantalizing?
Overdue? Appropriate? Besides, it's time we visited Verde's, your green
food shop at Spitalfield's Market. It's difficult to resist your restoration tales,
spitting baths of lime plaster, Jack the Ripper's blood-stained cobbles,
a dead fruit-seller trading on your initials, JW.

You're emphatic. Life's too short to eat badly. So zealous are you,
you took pestle and mortar, ground the fragments of an ancient leaning house
to dust. You added metal, brace and spice, created a flash new food shop
whose lungs now fill with the scents of French saffron and fugitive
Indian cardamom. You believe in soup and slow cookers, take time
to transform the letters of your name into endless varieties of tajine.

Janet and I will bring produce from our own farmers' market. Under cover
at Dunedin's railway station, I will choose blue cod, whitebait, globe artichokes
and Evansdale cheese. She will insist on tamarillos, feijoas and passionfruit,
luscious accompaniments for the coffee banana cake she'll bake; no need
for the recipe she sent to friends in letters in the mid-1970s.

Together, as the earth shutters the moon, we will fire the old coal range
in Brushfield Street, create a simple meal of complex parts. We will speak
of our affection for lighthouses, how we might seem tame and yet are feral
creatures, at home amongst kelp, barnacles, flying fish, salt.

You will find our whitebait fritters irresistible, Jeanette. Your conversion
to blue cod with mashed kumara and fresh crushed ginger will be immediate
and long-lasting.

Janet Frame was born in Dunedin on 28 August 1924; Jeanette Winterson in Manchester on 27 August 1959. We share a birthday week. In 2007, Upfront - a Dunedin-based women's poetry collective - arranged a poetry event to celebrate what would have been Janet's 83rd birthday. Taking liberties on birthdays is one of the poems I read that evening.

Tuesday 28 August 2007 also happened to be the date of a total lunar eclipse whose every phase was visible to us here in New Zealand. Total eclipses of the moon are remarkable, slow-moving spectacles; the deep, three-dimensional reality of our universe comes alive in a graceful celestial ballet as the moon swings unhurriedly through Earth's shadow. 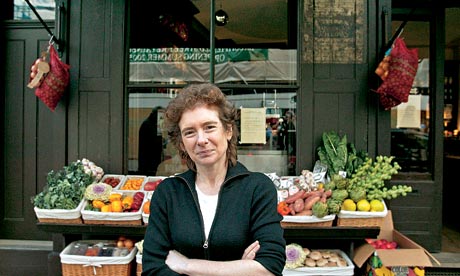 Jeanette Winterson in front of her Spitalfield's Market shop, London

Over on the TP hub this week, our editor is Australian poet P. S. Cottier with Piecemeal by Sarah Rice, described by Penelope as ". . . one of the most intellectually energetic people I have met.  Stand by her and the ideas swarm out like bees, but multi-coloured bees without stings. . . "